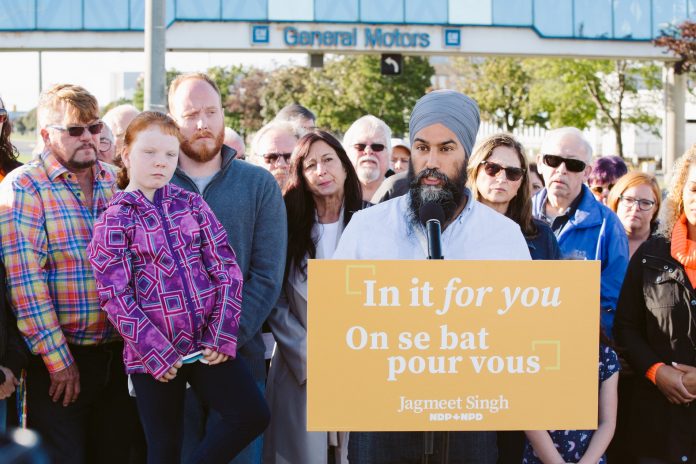 NDP Leader Jagmeet Singh on Saturday vowed to establish a National Automotive Strategy to help attract and retain investment in the sector.

Singh was in Oshawa to talk about his strategy for retaining and attracting the good-paying auto jobs that workers in communities across Ontario’s manufacturing heartland rely on. Oshawa is bracing for the loss of thousands of jobs when vehicle production ends at the local GM plant this year.

“Workers should never, ever feel abandoned by their government – but the Liberals and Conservatives have left workers in Oshawa on their own to deal with these devastating job cuts,” said Singh. “New Democrats will always support the auto sector, but we’ll do it with strings attached – jobs need to stay here in Canada.”

Oshawa’s story isn’t unique. Communities across southern Ontario have seen hundreds of thousands of manufacturing jobs disappear on the watch of Liberal and Conservative governments alike. In some cases, rich companies have been allowed to walk away from Canadian workers after pocketing billions of dollars in tax breaks.

“Auto workers deserve better than Liberal and Conservative only show up once the jobs have been lost,” said Singh. “Workers deserve a government that’s on their side, with a plan to attract and keep good-paying auto jobs in the long run. I’m ready to fight to make sure that we’re building the cars of the future right here in Ontario.”

ACCORDING to the NDP, in 2015, Justin Trudeau promised a National Manufacturing Strategy to revitalize Canada’s manufacturing sector.

But on manufacturing jobs, Justin Trudeau followed through on one promise: when he said his top priority for Southern Ontario was “transitioning away from manufacturing-based employment as a driver in the economy.”