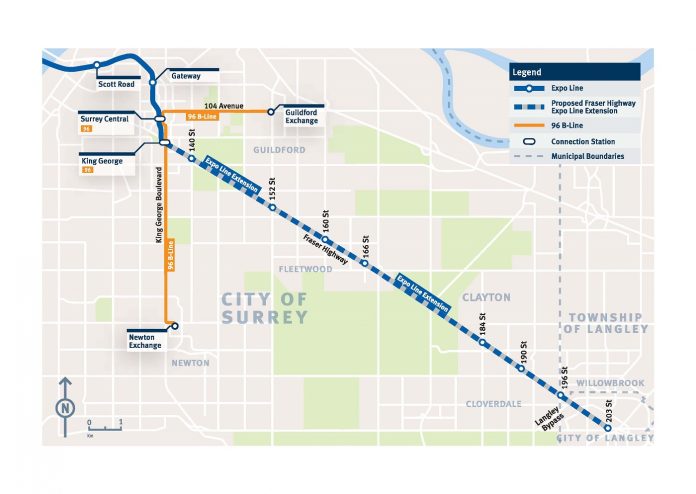 TRANSLINK on Friday released new details and cost estimates for the proposed Surrey Langley SkyTrain project. Three staging scenarios have been developed and could be fully constructed within five-and-a-half years from a full project approval date.

Currently there is approximately $1.6 billion available in funding, which is enough to see the project reach Fleetwood. These funds had previously been allocated to the Surrey-Newton-Guildford Light Rail Transit Project. Any work beyond this amount is unfunded and would require contributions from other sources. Further estimates are outlined in the table below.

The Surrey Langley SkyTrain project would see trains operate every 4 to 5 minutes during peak periods. A trip from Langley City Centre to King George Station would take around 22-minutes.

The new line is proposed to include eight SkyTrain stations as follows:

TransLink’s analysis shows the project performs well against objectives the public and stakeholders were consulted on. The benefit-cost ratio of the entire project is 1.24, which is comparable to previous SkyTrain business cases: the Canada Line (1.25) and Evergreen Extension (1.27). All major projects undergo this form of analysis to determine whether an investment represents good value.

Per the direction of the Mayors’ Council on Regional Transportation, work has been undertaken to provide options for rapid transit along 104th Avenue and King George Boulevard. The shortlist of options available are dependent upon how much funding is available. Further consultation is proposed to occur this fall.

TransLink will recommend that a full business case be developed for the Surrey Langley SkyTrain project by early next year. The Mayors’ Council will consider the findings and this recommendation at their meeting on Thursday, July 25.