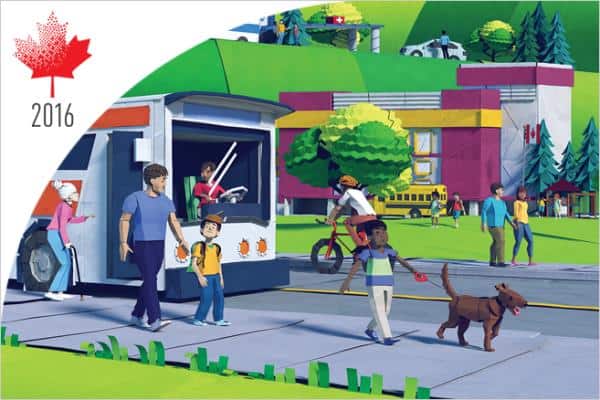 THE 2016 Census data show that, today, proportionally fewer households are composed of a ‘mom, dad and kids’ family and more people are living alone, as part of a couple without children, or as part of a multigenerational family, says Statistics Canada.

Canadians’ lives at home have evolved since Confederation, when large rural families consisting of a married couple and several children were common. In 1871, there were on average 5.6 people per household, a ratio that dropped to 2.4 by 2016.

These changes are the results of demographic shifts, such as population aging and increasing ethnocultural diversity, as well as social, economic and legislative changes. The evolving living arrangements and families of Canadians can also have consequences, for example on the housing market, on caregiving and care receiving and on intergenerational relationships.

The percentage of one-person households is now at a high in Canada’s 150-year history.

There were 14.1 million private households in Canada in 2016, 9.5 million (67.7%) of which were composed of at least one census family. Census families are defined as married or common-law couples, with or without children, and lone-parent families.

ONE-PERSON households accounted for 28.2% of all households in 2016—the highest share since Confederation in 1867.

At the time of Confederation few people lived alone, and the vast majority of households were family households. Since 1951, the percentage of households comprised of just one person increased steadily, from 7.4% to 28.2% in 2016. Looking at it another way, in 2016, 13.9% of the Canadian population aged 15 and over lived alone, compared with 1.8% in 1951.

A number of social, economic and demographic factors have contributed to the rise in the number of people living alone. For example, income redistribution, pensions and the increased presence of women in the workforce have led to more people being economically independent today than in the past, especially in older age groups.

In addition, higher separation and divorce rates have led to more people living alone instead of in couples. Finally, population aging and higher life expectancy have also contributed to the increase in one-person households, given that a larger share of seniors live alone as compared to other age groups.

THE number of couples without children is growing faster than those with children.

Trends in the share of couples living with or without children also reflect the growing diversity of households and families in Canada.

The proportion of couples living with children has been decreasing for some time. This is mostly due to population aging. As the large baby-boom generation—people born from 1946 to 1965—grows older, more and more couples are becoming empty nesters due to their children leaving home.

However, this trend has been partly offset by an increasing share of young adults living with their parents over the last four decades.

Married couples represented the majority of couples in 2016, although common-law unions are becoming more frequent in every province and territory. In 2016, over one-fifth of all couples (21.3%) were living common law, more than three times the share in 1981 (6.3%).

MULTIGENERATIONAL households are the fastest growing type of household.

The increase in multigenerational households may be partly attributed to Canada’s changing ethnocultural composition. This type of living arrangement is more common among Aboriginal and immigrant populations, which account for a growing share of Canada’s population. The higher number of multigenerational households may also be related to housing needs and the high cost of living in some regions of the country.