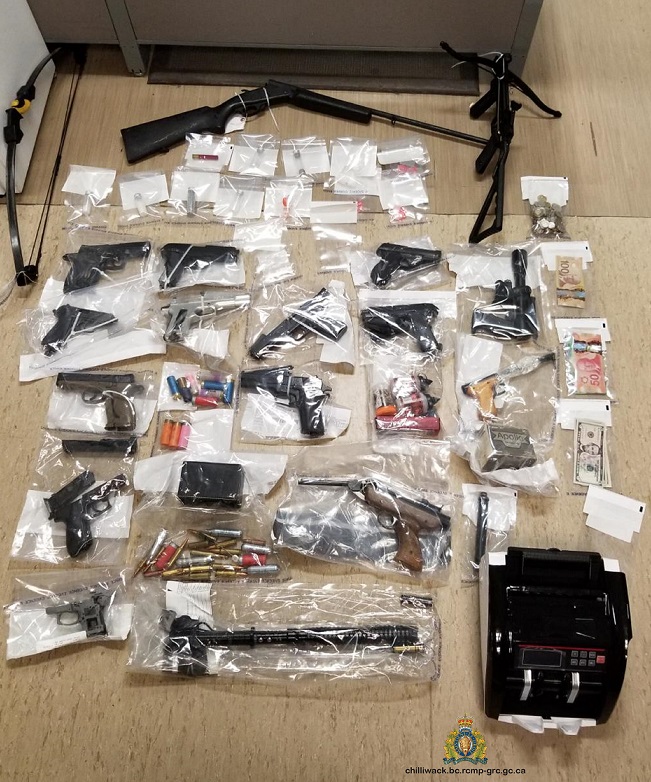 FIREARMS, drugs, and vehicles were seized by RCMP during a police investigation of alleged drug trafficking.

Officers of the Chilliwack RCMP Priority Target Team (PTT) executed a search warrant of an address in the 46000-block of Princess Avenue on July 5.

A loaded shotgun, a modified handgun, two cross bows, ammunition and replica handgun air pistols were seized.  A motorcycle, a dirt bike, and two scooters linked to thefts reported to Chilliwack RCMP together with drugs believed to be fentanyl, paraphernalia associated to drug trafficking, and cash were also seized. One person was arrested on an unrelated matter.

Following a thorough review of evidence gathered, all circumstances of the investigation will be forwarded in a report by the RCMP to the BC Prosecution Service for their assessment of criminal and Controlled Drug and Substance Act (CDSA) charges.

“A number of dangerous weapons were prevented from reaching the streets of our community,” said Cpl. Mike Rail, Spokesperson for the UFVRD, on Wednesday.

Tips on how to spot a crime house or drug dealer in your neighbourhood:

·         Traffic stops where a resident comes out to talk briefly with occupants of the vehicle.

RCMP remind everyone who witnesses anything they believe to be suspicious in nature to contact the Chilliwack RCMP or, should you wish to remain anonymous, call Crime Stoppers at 1-800-222-8477 (TIPS).