DAVE Hayer, former MLA for Surrey-Tynehead (2001-2013) has been elected as the vice president of the Association of Former MLAs of BC.

The Annual General Meeting of the association was held at the Parliament Buildings in Victoria and a dinner was hosted by Lieutenant Governor Janet Austin at the Government House. The guest speaker was Global BC’s Keith Baldrey. 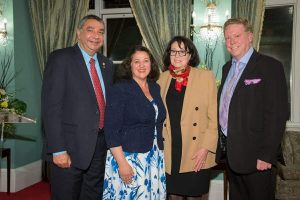 The association, previously called the Association of Ex-MLAs of B.C., is non-partisan and is made up of former MLAs from all political parties. It was founded in 1987 .

The MLAs also attended the Speaker’s forum and roundtable to discuss the role of MLAs. Topics discussed included: What does it mean to have representative and responsible government? How well do MLAs undertake and balance their responsibilities? How can MLAs most effectively represent their constituents? Other topics focused around parliamentary practice, public engagement and party and caucus dynamics.