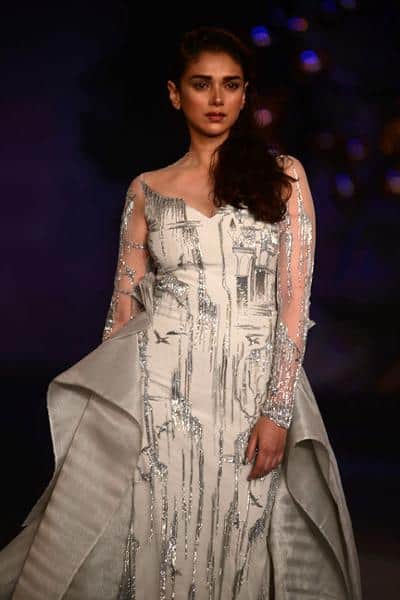 New Delhi (PTI): Actress Aditi Rao Hydari said fashion designer Gaurav Gupta spoiled her too much and made her channelise her inner royal at the India Couture Week 2017.

The 30-year-old actress, who was dressed in a long, embroidered white gown with a strong shade of silver grey, aptly looked the part of a fantasy world, created by her long-time friend’s haute couture line titled, “Moondust”.

“This was a special show as it was the first time I was walking for Gaurav. He is one of the first people to encourage and dress me up, when I was fairly new in the industry. (I remember) I went into his factory and sat there the whole day.

“He pampered me. I mixed and matched different bits from all his collections – old and new – he made me feel like a real princess. From that day to now, I’m so close to him and he is so protective of me. He always saves the nicest clothes for me. Often, I end up stealing the best ones,” Hydari told the reporters here.

The actress, who features with actor Sanjay Dutt in his comeback film “Bhoomi”, said she has often found it difficult to explain her style statement.

“I don’t know what exactly my personal style is. I like being effortless, classic. Even if I’m dressed up (like this), the hair will be effortless or the makeup and my vibe will be like that. I often go from classic to bohemian. But I love this ephemeral vibe,” she said.

The Omung Kumar-directed film’s first look was unveiled yesterday and Hydari said it had made the day all the more memorable.

“It is a special day, of course. It’s Sanju sir’s comeback film. I feel very lucky to be working with him. But there’s a lot more to come,” she said.

Hydari said she may have walked the ramp several times now but she still felt jittery before stepping onto the stage.

“Every time do a show ask myself why am I doing this? Am I mad? But when I step onto the stage, I don’t want to leave.

And usually the walk ends quickly, so I feel ‘oh that’s it’.

“I always feel nervous around models. I feel like Bambi around them. But they are always sweet to me. When I first walked I was a little intimidated… I felt they were towering over me and I knew no one. Since, I know them now, it’s good to see familiar faces around.”

With oodles of dainty layers in sheer, the colour palette by Gupta ranged from white to pink to teal to grey to maroonish brown.

The designer said, “We have used fabrics such as crepes, chiffon, organza and a special type of mesh. All the lace, bead, thread work has been made from scratch, which makes this collection haute couture.

“I have been very truthful to myself while designing this collection. It’s inspired by nature, forest, a fantasy space, almost like a parallel world that is happening on the moon which is taking place in a fairy tale way. It’s like art-like sculptures made into garments, that are wearable,” he said.

Praising his muse, Gupta said Hydari was open to experimenting and did not follow trends.

“She has worn so many looks for me and she just goes for it. Not only that, but Aditi also finds her personality in those clothes. She does not blindly go for it. She’s a thinking wearer,” he said.

The designer added as a fashion industry, India is one of the major places that consumes couture and it will continue to thrive in the country for many years to come.