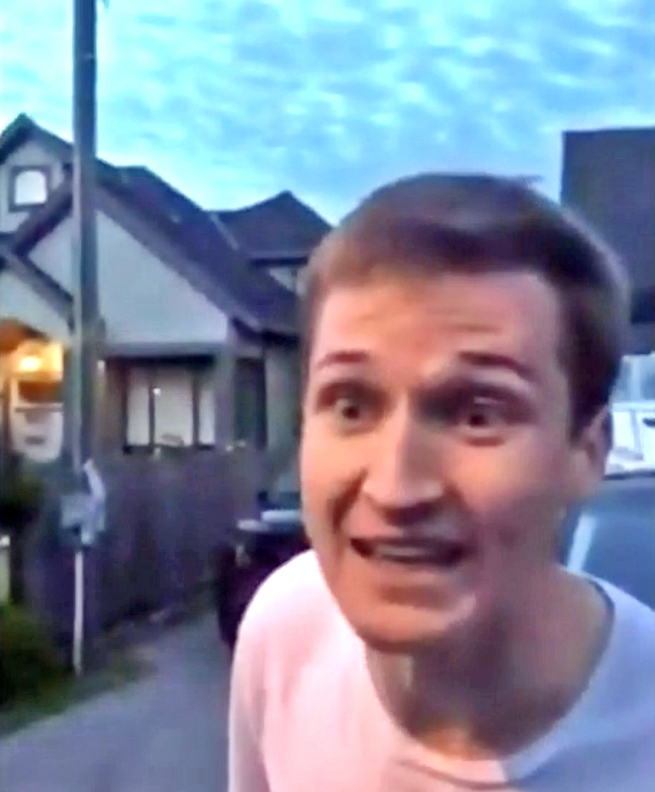 RACISM against South Asians is alive and kicking in Surrey.

An appalling incident occurred on May 29 in which a young man, identified as Kayl Riddoch (see photo) by CTV News on Thursday, hurled racist insults at a South Asian man in South Surrey following a driving dispute.

The incident which was caught on video and posted online has gone viral although the original poster removed it.

CTV reported that a South Asian driver parked his truck briefly before Riddoch’s family home and Riddoch approached him.

In the video, the South Asian man is heard saying, “Why are you doing this?”

And Riddoch yells back aggressively at him:

CTV reported that Riddoch posted a video of the event showing the South Asian man’s vehicle parked before his family house and claimed that the man was harassing his family.

The South Asian man’s son hit back by posting the video of Riddoch’s racist outburst and it went viral with the Riddochs receiving all kinds of threats. The video was later removed.

Surrey RCMP went on the defensive when CTV asked them why they had ordered the South Asian young man to take down the video. “It was a suggestion, not a direction,” police said. They explained that it was to help bring down tensions.

Surrey RCMP told the Peace Arch News that there wasn’t enough evidence to lay hate crime charges. The comments were reactive as opposed to targeting someone because of their race.

But when you watch the level of hate against South Asians in the video, it is very apparent that that is the kind of language many white racists use regularly among themselves when talking of South Asians – only, this got exposed!

That is why many feel it is so important to replace the RCMP with a Surrey municipal police force and start a new chapter in B.C.’s second largest city.

However, the RCMP said they “will be looking into allegations of harassment, intimidation and uttering threats against parties in that video.”

The father of the young man who made the racist comments told the Peace Arch News that his son and family have tried to apologize. The son confessed that his comments were inappropriate and hurtful.

The son of the South Asian man spoke to the newspaper about how all this had caused extreme duress to his family, and said that any apology at this point felt like damage control.

However, the Peace Arch News reported that he did not condone the public’s response towards his neighbours. The newspaper said that he appealed to the public to “take this time to have an uncomfortable conversation with your family and friends, with your colleagues and with your neighbours… and acknowledge the acts of casual racism that each and every one of us practices every day without knowing.”

The VOICE is appealing to everyone to keep calm and NOT to break the law even if someone provokes you. No one should take the law into their own hands.