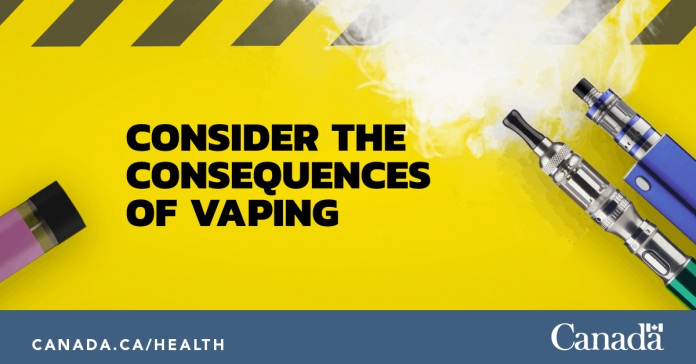 Health Canada says the Canadian market for vaping is evolving rapidly, and emerging evidence suggests that youth uptake of vaping products is on the rise.

Canada already has a strong regulatory framework for vaping products in place through the Tobacco and Vaping Products Act, which prohibits advertising that appeals to youth. To further strengthen this framework, Health Canada has published a Notice of Intent outlining the department’s plans for new advertising rules. The proposed rules would restrict where advertisements could be displayed to limit their visibility to young people. They would also require health warning messages on permitted advertisements, and would restrict the display of vaping products at points of sale.

The Notice of Intent initiates a 45-day consultation period. Health Canada will consider the comments received through this consultation in the drafting of new proposed regulations. All Canadians are encouraged to provide their feedback on proposals to protect youth and non-smokers from the harms and risks associated with vaping products.

In addition to the Notice of Intent, Health Canada will post in March 2019 another consultation document seeking comments on further measures being considered to address and reverse the recent trends of youth vaping. Some of these additional measures could include examining the role of flavours, nicotine concentration and product design in making vaping products appealing to youth and non-smokers.

Petitpas Taylor has also engaged her provincial and territorial colleagues to further support federal efforts to address youth vaping. Health Canada continues to support the need to discourage youth and non-smokers from vaping, while urging smokers to quit.

This week also marks the official launch of the Government of Canada’s new public education campaign to raise awareness, particularly among youth, of the harms and risks of vaping. The campaign invites youth to consider the consequences of vaping, and equips parents and other trusted adults with tools and resources to support conversations with teenagers about the health risks of vaping. The campaign will continue through 2019.

Petitpas Taylor said: “I am deeply concerned about recent reports that youth vaping is on the rise. This includes stories coming out of schools across Canada, and emerging data suggesting that young Canadians are taking up vaping at an alarming rate. I am hearing from parents, educators and the health care community that they share my concerns about youth vaping. We cannot allow these products to threaten the hard-earned gains we’ve made in tobacco control. The proposed regulatory measures and our public awareness campaign will drive home the message: if you don’t smoke, don’t vape.”