New Delhi (PTI): Marshal of the Indian Air Force Arjan Singh is remembered by veterans of the India-Pakistan 1965 war as a chief who led from the front and went from unit to unit, congratulating his men for their successes or boosting their morale on losses.

Arjan Singh, they recalled, did not command his force from his distant headquarters but went to units to communicate with the men.

Wing Commander (Retd) Vinod Nebb was in Halwara in Punjab when the then Air Chief, Arjan Singh, came calling. The top officer met Nebb and wanted to know the details of how he shot down an F-86 Sabre of the Pakistan Air Force.

“We didn’t go beyond our commanding officer and seldom met

our station commander. Therefore, for a small fry like me, then a Flying Officer, it was a great honour that the man flew down from Delhi to Halwara in his Canberra, a bomber aircraft,” Nebb told PTI over the phone.

Arjan Singh, he said, wanted to hear every little detail about how he brought the aircraft down.

“He wanted to know everything about my kill. It was amazing. Anybody would give his right arm for him, there is no question about it. The man was great,” Nebb said. 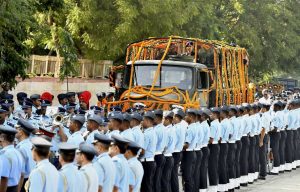 Nebb has two Vir Chakras to his credit, one for claiming the Pakistani fighter jet in 1965 and another for his feats during the 1971 war.

Another war hero said the IAF icon felt for his airmen from the heart, particularly the men he lost, and always condoled with their families.

“There was not a place he didn’t visit right in the thick of the war. He would go wherever there was activity. And then he used to meet each and everyone down the line. It was remarkable,” said Wing Commander (Retd) Jagmohan Nath.

Nath, a double Maha Vir Chakra awardee and one of the most decorated officers of his time, said he was a man “who felt for the defence services from the heart”, particularly for IAF pilots who were killed or injured.

“He would visit their families and widows. Never did he forget them. He was a remarkable person. I can’t praise him enough,” Nath, who was involved in reconnaissance operations in 1965, told PTI.

Arjan Singh put the interest and safety of his airmen before his own. Close friend and former Air Chief Marshal NC Suri recalled a habit that the Marshal had which underlined this.

“He was on Canberra bombers and the peculiarity in this aircraft was that the pilot has an ejection seat but the navigator had to jump out of the aircraft. But Marshal Arjan Singh refused to take the pin out of the ejection seat before taking off. In other words, he was also incapable of ejecting,” Suri, who was at Halwara during the war, said.

He added, “So here is a man who felt that his navigator was equally important to him, which was very remarkable.”

Former Air Marshal Denzil Keelor said perhaps it was Arjan Singh’s experience during World War II as a young IAF officer that turned him into a quintessential “field” man.

“He reached out to everyone down the hierarchy in the field. He knew all the pilots’ names, he knew me by my first name,” he said.

And this, he held, was because of Arjan Singh’s WWII experience.

“Once you take part in a war you become a field man and that was the kind of man he was,” he said.

Keelor and his late brother Trevor Keelor are famously referred to as the Keelor brothers, who were honoured with a Vir Chakra each for shooting down the superior Sabres.

Arjan Singh, 98, died on Saturday. His body was cremated with full state honours on Monday.