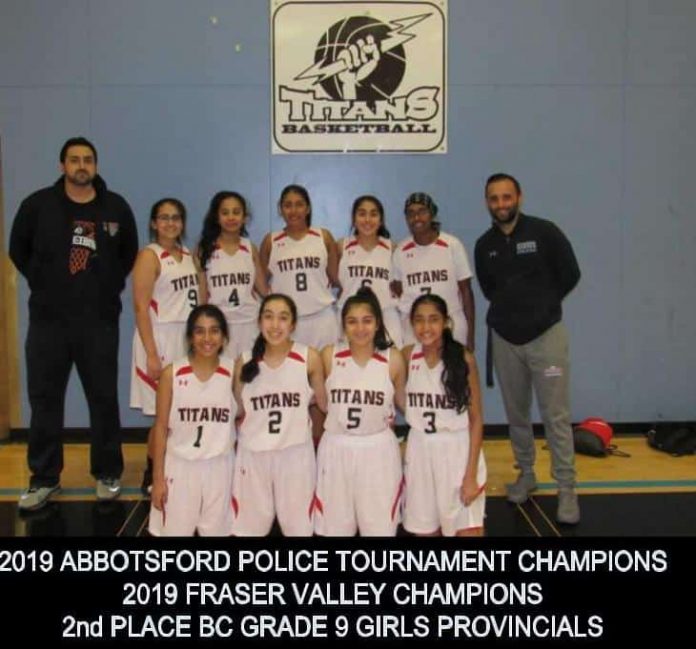 FOR the first time in school history, there are two banners hanging from the rafters at Abbotsford Traditional Secondary. On March 2, The ATSS Grade 9 girls, coached by Aman Virk and Gurinder Dhillon, capped off an unprecedented and historic season, being runners-up in the provincial championship game and finishing second in the province.

“We are so proud of our girls,” said Virk. “Gurinder and I were lucky enough this group as Grade 8s, and they are the hardest work group we have ever coached.” The Titans have made huge strides after a disappointing season the year before.

Dhillon added: “After losing in the second round of the Fraser Valleys last year to being APD Champions, Fraser Valley Champions and almost being provincial champions, this is a huge accomplishment!”

Abbotsford Traditional is one of the smallest schools in the province, but all year long the team dominated against AAA and AAAA schools, with a record of 25 wins and only 4 losses, and an average margin of victory of 20 points. Their most dominant performance came at the Abbotsford Police Tournament where they defeated Robert Bateman 48-24, Rick Hansen 57-16, W.J. Mouat 40-12, and in the finals, they beat Robert Bateman a second time by a score of 47-29.

Perhaps, the biggest accomplishment of the season was capturing the first ever Fraser Valley Basketball Championship banner for the school. “Winning the Fraser Valleys has turned some heads, our girls have become role models and it has put our school on the map.” said Virk. “At provincials, other coaches were telling me that they had never heard of us before, and asking me where we were from.” Virk added with a chuckle: “I told them, if you didn’t know who we were before, you know now.”

Virk and Dhillon will continue to coach the girls next year, as all of them return as Grade 10s and the girls are poised to another run at the Provincial Championship. “These girls have truly made history this season” said Virk, “they can forever be proud of the two banners that will hang in the ATSS gym as symbols of their hard work, commitment, drive and dedication.”