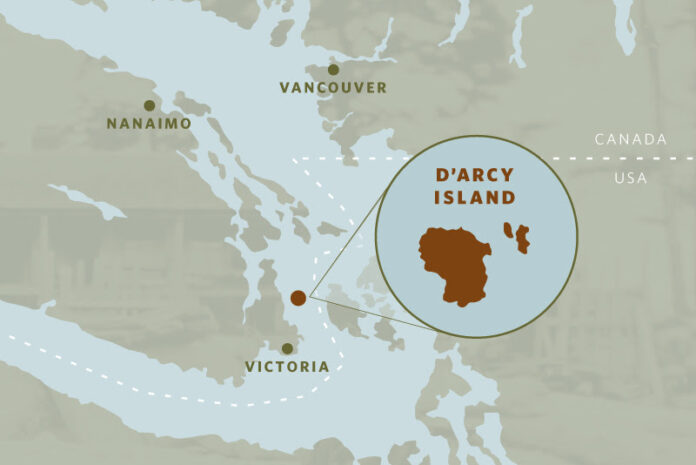 BRITISH Columbians who spent the spring locked down due to COVID-19 are now making up for lost time by getting outdoors and enjoying B.C.’s parks.

This includes one B.C. park that was once used to quarantine people with leprosy, also known as Hansen’s disease.

The history of D’Arcy Island is closely tied with B.C.’s history of racism. Professor Renisa Mawani of UBC’s sociology department has studied both, and will connect them to the current COVID-19 pandemic during a free online lecture on July 30. We spoke with Mawani about D’Arcy Island.

Where is D’Arcy Island and what is its history with quarantine?

D’Arcy Island is part of a national park reserve in Haro Strait, approximately 17 kilometres from Victoria. It’s a popular place for kayakers and campers. But what many visitors miss is a small plaque that commemorates the island’s history. From 1891 to 1924, D’Arcy Island was a leprosy colony, where mostly Chinese men were quarantined and essentially left to die.

How did that begin?

In 1881 the Victoria health inspector was called to Victoria’s Chinatown to investigate complaints about a group of men who were behaving strangely. He found five men who seemed to be afflicted with some disease. Authorities thought it might be leprosy, so they sent them to D’Arcy Island, where they established a leprosy colony. It wasn’t until much later that Dr. Smith, who oversaw the leprosarium in Tracadie, N.B, was sent to confirm their diagnosis.

Why were authorities so quick to banish these men?

This is the period where we see anti-Chinese racism legalized in Canada through the Chinese Head Tax in 1885, followed by the Chinese Exclusion Act in 1923.

There weren’t many cases of leprosy in B.C., especially among Chinese residents, yet the Royal Commission on Chinese Immigration in 1885 asked witnesses a specific question about leprosy: “What personal knowledge have you of the presence of leprosy among [the Chinese], and have you any personal knowledge of leprosy being communicated from them to the whites, and if so, how many instances and under what circumstances?”

Just as there were growing calls to restrict and ultimately prohibit migration from China, we see leprosy emerge as a disease that becomes closely associated with Chinese migration. So we need to think of D’Arcy Island as part of a wider atmosphere of anti-Chinese racism that was aimed at securing B.C. as a space of whiteness and white supremacy.

There were island lazarettos established around the world, usually staffed by priests and nuns who took care of people that were afflicted with the disease. What makes D’Arcy Island especially horrendous is that the men were not treated or cared for. The city sent supplies every three months, so the men essentially had to take care of themselves. They had to dig graves for those who perished. It was because the inhabitants of D’Arcy Island were overwhelmingly Chinese that they were left to die.

In what ways does the COVID-19 pandemic remind you of this history?

In the current pandemic, Wuhan has been identified as the source of COVID-19. In response, we’ve seen a rise in anti-Asian violence in Canada, the U.S. and elsewhere. We need to think of racism not in terms of individual attitudes but as symptomatic of wider structural and historical inequalities that are local, national, and global. For example, President Trump has made repeated racist claims that link COVID-19 to China. His comments need to be considered within wider geopolitical struggles—the rise of China in the global economy, concerns regarding trade between China and the U.S., China’s new security law and its relationship with Hong Kong. We also need to think of COVID-19 as part of a longer history of anti-Asian racism that has represented China and Chinese people as diseased. The associations between race and disease have been a formative part of Canada and the U.S. as white settler nations. Of course COVID-19 is not leprosy, but the social, political, and legal responses to it—especially the connections between racism, disease, and white supremacy—feel very familiar to me.

Renisa Mawani will speak about D’Arcy Island on Thursday at 1 p.m. as part of the One Hour @ UBC online lecture series developed in partnership between IBPOC Connections, an initiative of UBC’s Equity & Inclusion Office, and UBC Extended Learning. For details and to register, visit https://extendedlearning.ubc.ca/study-topic/one-hour-ubc.

UBC continues to be a global leader in impact