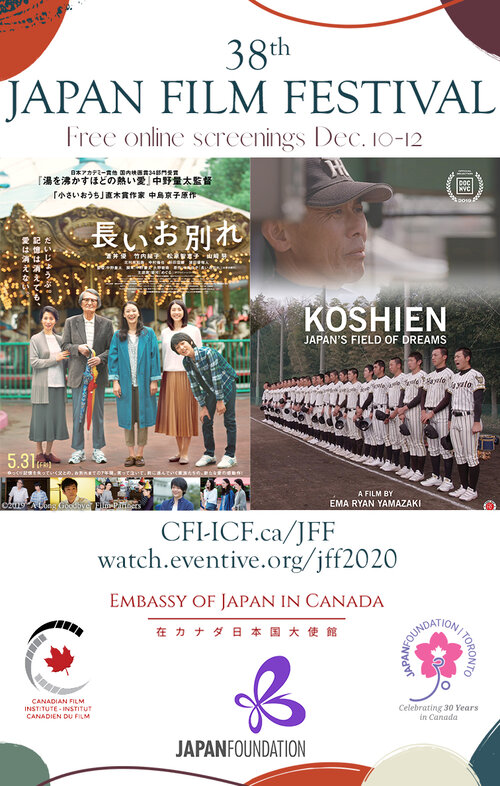 THE 38th Japan Film Festival is giving Canada a taste of Japanese film with its first online edition, running December 10 to 12, 2020. The Festival features two very different but equally fascinating films, both Canadian premieres, that anyone across the country can enjoy free of charge, thanks to the Embassy of Japan and The Japan Foundation.

“We are so proud to have partnered with the Embassy of Japan and The Japan Foundation for almost four decades to bring the best of contemporary Japanese cinema to Ottawa. This year we are thrilled to be able to offer the online Japan Film Festival to Canadians all across the country,” says Canadian Film Institute Executive Director, Tom McSorley. He adds, “These two films are very different in style and in subject matter, but both A LONG GOODBYE, a moving family drama about dementia, and KOSHIEN: JAPAN’s FIELD OF DREAMS, an emotionally rich documentary about high school baseball, deliver engaging, entertaining cinematic experiences. Stay after the films, too, for additional content, including Q&A sessions with Toronto Mr. Kiyoshi Dembo discussing dementia, and the writer-director of KOSHIEN, Ema Ryan Yamazaki.”

Koshien: Japan’s Field of Dreams will hit a home run with baseball lovers, or anyone interested in the history of sports. In this documentary about the post-war phenomenon of baseball in Japan, a head coach’s entire life has been spent preparing for the historic 100th Koshien, a high school tournament that seems to define the Japanese summer. Will his fixation on this tournament— at the exclusion of everything else, including time with his own son —pay off for him and his team, or is he a relic of a bygone era?

Audiences can also take a journey through memories, and the lack thereof, with A Long Goodbye, the tale of Shohei, a retired school principal struggling with episodes caused by dementia. Both touching and humorous, this film adaptation of Kyoko Nakajima’s novel of the same name delivers a relatable story to anyone who has taken care of someone living through Alzheimer’s. Says the Japan Times, “A favorite of Akira Kurosawa and Juzo Itami, the 82-year-old Yamazaki plays Shohei with dry comic touches, while calibrating every stage of his deterioration with a realism that edges over into the disturbing.”

“We are pleased to collaborate with CFI and the Japan Foundation Toronto for the 38th Japan Film Festival in Ottawa,” says the Japanese Ambassador. “It is a testament to the strong bonds uniting our peoples and countries that Japan and Canada continue sharing their cultures with each other even during this time of uncertainty and global pandemic.”

In this first online edition of the Japan Film Festival, both films will be available on-demand for a 72-hour period starting December 10. They are both accessible Canada-wide and will be presented in their original language with English subtitles. Admission to the JFF is free, presented with the support of and in collaboration with the Embassy of Japan and The Japan Foundation.

More information about the festival can be found at https://www.cfi-icf.ca/jff.