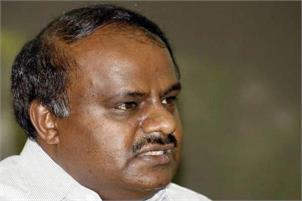 Bengaluru (PTI): JD(S) leader H D Kumaraswamy, who is all set to take over as Karnataka Chief Minister, on Sunday dismissed reports about his party working out a power sharing formula of heading the government for 30 months each, with its coalition partner the Congress.

“No such talks have taken place,” he told reporters here when asked about reports on power-sharing formula of 30 months each being worked out with the Congress, with whom JDS has stitched up a post-poll alliance after the May 12 assembly elections delivered a fractured mandate.

There were reports in a section of the media about both parties heading the government for 30 months each on rotation, similar to the 20:20 months power sharing agreement in 2006 with the BJP.

The JD(S) had then reneged on its commitment to share the power for the remaining 20 months with the BJP and refused to hand over the mantle to B S Yeddyurappa, causing the collapse of the government.

In the following elections in 2008, BJP had stormed to power on its own with Yedyurappa as Chief Minister of the first ever saffron party government in the South.

On reports about parleys with Congress leaders regarding elections in Rajarajeshwari Nagar and Jayanagar assembly constituencies in Bengaluru, Kumaraswamy described it as “bogus”.

“It is bogus news…No such discussions have taken place.

Wining Rajarajeshwari Nagar and Jayanagara is a necessity.

Till now, no such discussions have happened,” he said.

While polling was deferred in Rajarajeshwari Nagar over allegations of electoral malpractice,election to the Jayanagar seat was countermanded following the death of the BJP candidate.

In the assembly elections, BJP had emerged as the single largest party with 104 seats, but fell short of a majority.

Yeddyurappa had formed the government, but not being able to make up for the shortfall, he lost the numbers gained and resigned as chief minister without facing the trust vote in the assembly on Saturday.

The Congress JD(S) combine with a claimed strength of 117 with the support of others has been invited by Governor Vajubhai Vala to form the government, giving Kumaraswamy a 15 day window to prove his majority on the floor of the Assembly.

Kumaraswamy met the party legislators who are still camped at a hotel in the city to insulate them from alleged poaching attempt by the BJP.

He said he has left the choice to the legislators to decide on staying in the hotel.

The JD(S) leader will meet UPA chief Sonia Gandhi and her son Congress President Rahul Gandhi in Delhi on Monday to discuss the modalities of government formation and invite them for the swearing in ceremony on May 23.

Kumaraswamy later left for Tamil Nadu for a temple visit.