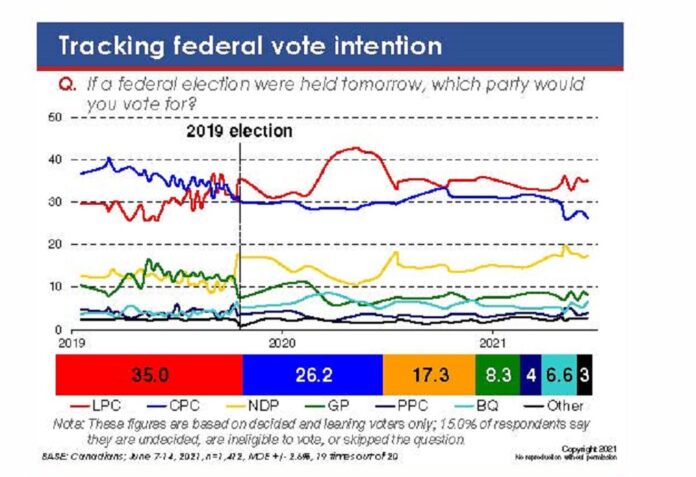 AT 35 points, the Liberals enjoy a pretty stable lead over the Conservatives who remain mired at 26 per cent, eight points below the level that then-Conservative Party Leader Andrew Scheer attained in the last election (which was insufficient to wrest government from Justin Trudeau’s Liberals), states an EKOS Poll analysis.

While 35 per cent is a fairly modest level, it would almost certainly generate a majority government for the Liberals if these numbers were to hold in an election. At 43 per cent in Ontario, 32 per cent in Quebec, and 57 per cent in the Atlantic, the Liberals would have most – if not all – of the necessary ingredients for a majority before even getting to Western Canada.

The Conservatives appear to be in trouble. They have lost some support to the People’s Party who are now at four points. They only lead in two provinces (Alberta and Saskatchewan). They are now tied with the NDP with women, which is remarkable. The NDP, at 17 per cent, is showing signs of life and is doing well with women and millennial voters.

The Green Party, despite the recent brouhaha, is at just over eight per cent and is at 18 per cent in British Columbia. The Bloc Québécois has shown upward movement in our poll and the party is now at 29 points in Quebec. The People’s Party is up from their dismal election results and they are clearly disaffected Conservative supporters who probably find the Conservative shift to more moderate ground repugnant. Finally, there is an unusually high ‘other’ count of about three per cent. On inspection, these also appear to be voters on the right who are unhappy with Conservative move to more moderate positions.

One interesting thing to watch is whether or not the malaise in the Conservative Party alters some of the strategic voting patterns of the electorate. For some time, promiscuous progressive voters have shifted to the Liberals in fear of a Conservative government (even if in some cases they preferred another centre-left option). If this factor is removed, it may augur well for the NDP and Green parties. On the other end of the spectrum, if People’s Party supporters come to believe O’Toole has no chance of winning, we may also see the party retaining voters that shifted to the Conservative Party in late stages of 2019 campaign in order to prevent a Justin Trudeau victory.

The Liberals do extremely well with the university educated, while the Conservatives do best with college educated. In an interesting new phenomenon, the Conservative lead with upper-class voters and no longer have a lead with working-class voters. The Liberals also enjoy a striking lead with visible minorities, but this has been a sector that has moved back and forth in recent elections.

All in all, it seems that the table is set for a Liberal majority, if they choose to pull the plug on the current parliament and go to the polls in late summer or early fall. As with all other things, all of this hinges on the pandemic. If it concludes soon, the Liberals will be hard to stop. If it throws another nasty surprise such as fourth wave linked to the Delta variant, this could alter things. The more likely bet right now is that the dramatic progress on vaccine rollout will produce the safer scenario of ‘practical’ herd immunity in the near future.

The field dates for this survey are June 7-14, 2021. In total, a random sample of 1,412 Canadians aged 18 and over responded to the survey. The margin of error associated with the total sample is +/-2.6 percentage points, 19 times out of 20.
Note that the margin of error increases when the results are sub-divided (i.e., error margins for sub-groups such as region, sex, age, education). All the data have been statistically weighted by age, gender, and region to ensure the sample’s composition reflects that of the actual population of Canada according to Census data.

Most Canadians won’t be upset if early election called; Liberals lead by 9 over Conservatives: Abacus Data

Nearly half of Canadians think Liberals will win the federal election