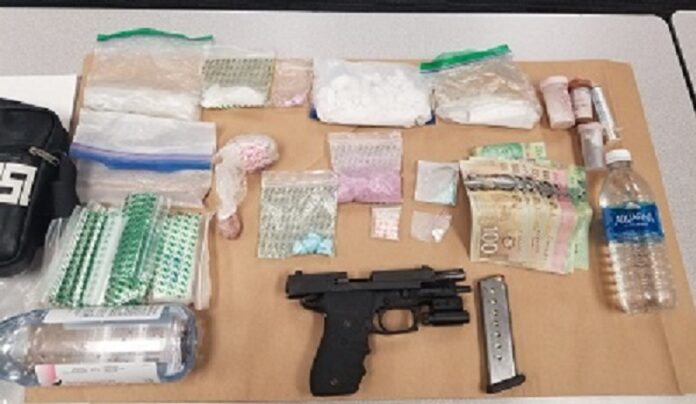 A quick response by Surrey RCMP frontline officers, the Surrey Gang Enforcement Team (SGET), and Air 1 led to the arrest of a man and woman and the preservation of evidence, including a loaded gun.

On May 6 at 7:20 p.m., frontline officers attempted to conduct a traffic stop with a vehicle for a Motor Vehicle Act violation. The vehicle failed to stop for police and fled at a high rate of speed. The Air 1 helicopter was in the area and was able to observe the vehicle from a distance and provide direction to officers on the ground.

Following the directions of Air 1, frontline officers and SGET members converged in the area of the 8200-block of 120 Street as the vehicle went into an underground parkade. A man and a woman were arrested for fail to stop for police and dangerous operation of a motor vehicle.

Further investigation led to the location and seizure of a loaded firearm and drugs pre-packaged in a way which is consistent with drug trafficking.

The man and woman were released with conditions and without charges. The investigation is ongoing.

Surrey RCMP say they continue to be engaged in an aggressive plan to target criminals who put the community at risk. They say they will continue their effort to take guns off the street to make the community safe. The SGET officers have direct contact with gang members and affiliates in Surrey through increased curfew checks as well as continued targeted enforcement and vehicle interdictions.
Anyone with more information is asked to contact the Surrey RCMP at 604-599-0502. If you wish to make an anonymous report, contact Crime Stoppers at 1-800-222-TIPS or www.solvecrime.ca.

BJP most popular party among Indian diaspora in US, but majority critical of Government policies

BJP most popular party among Indian diaspora in US, but majority...