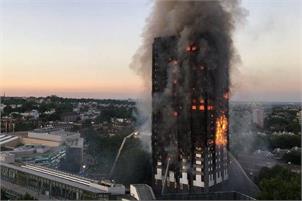 London (PTI): A huge blaze on Wednesday engulfed a 24-storey residential tower block in west London housing over 100 families, killing at least 12 people and injuring 74 others, with police suspecting the death toll could rise further.

The fire at Grenfell Tower on the Lancaster West Estate in Latimer Road was reported at 01:16 local time. About 600 people were believed to have been inside the tower’s 120 flats when the blaze ripped through the building.

The Metropolitan Police, which previously had put the number of fatalities at six, now raised the death toll to 12.

Commander Stuart Cundy, of the Metropolitan Police earlier said the recovery operation would be complex “over a number of days.”

He said it was likely to be some time before police could identify the victims, and it was too early to speculate on the cause of the fire.

The fire is thought to have started because of a faulty refrigerator on the 3rd or 4th floor of the building soon after midnight and destroyed flat after flat.

By noon, the building looked to be just smoking ruins but the fire again took hold, and cladding began to fall to the ground.

Eyewitnesses described people trapped in the burning tower, in north Kensington, screaming for help and yelling for their children to be saved.

Firefighters rescued many people and are still trying to put the fire out in the 24-storey block 12 hours on.

Police say there may still be people in the building who are unaccounted for.

Eyewitnesses said they saw lights – thought to be mobile phones or torches – flashing at the top of the block of flats, and trapped residents coming to their windows – some holding children.

It is understood that “several hundred” people would have been in the block when the fire broke out shortly after midnight, most of them sleeping.

“This is an unprecedented incident. In my 29 years of being a firefighter, I have never ever seen anything of this scale,” London Fire Brigade chief Dany Cotton told reporters.

“Extensive cordons remain in place and a number of nearby residents have been evacuated as a precaution,” Cundy said.

Commander Stuart Cundy, of the Metropolitan Police, said the recovery operation would be “complex and lengthy”, and the number of fatalities was expected to rise.

He declined to give any details of the number of people who may be missing.

He said it was likely to be some time before police could identify the victims, adding that it was too early to speculate on the cause of the fire.

Eyewitnesses reported seeing people trapped inside the burning building screaming for help and shouting for their children to be saved. People screamed for help as the fire took hold of the building. Some residents were seen using bedsheets to make their escape from the tower block.

As fire-fighters fought the blaze, witnesses said a baby was caught by members of the public after being dropped from the window of the 9th floor.

Fire Commissioner Dany Cotton said firefighters expected to be on the scene for at least another 24 hours and she would not speculate about the cause of the blaze.

She said there were concerns that people were still inside the tower and she urged all residents to make sure they had reported themselves to police so that the authorities know they are safe.

Prime Minister Theresa May is “deeply saddened by the tragic loss of life”, said Downing Street.

The area around Grenfell Tower is home to a large number of Muslims. Many were awake at the time the fire broke out having their early morning meal before beginning the daily fast for the holy month of Ramzan.

The survivors, whose belongings are presumed to have been destroyed, gathered in the nearby Rugby Portobello community centre where they were given water, clothes and blankets.

Michael Paramasivan, who lives on the seventh floor with his girlfriend and young daughter, said he ignored official advice to stay in your home.

“If we had stayed in that flat, we would’ve perished. My gut instinct told me just to get the girls out. I wrapped the little one up because of the smoke and I just got them out,” he said.

“I’m lucky to be alive and lots of people have not got out of the building I’ve lost everything I own. I m standing here in everything I ve got,” one survivor said.

Paul Munakr, who lives on the seventh floor, spoke of his escape. “As I was going down the stairs, there were firefighters, truly amazing firefighters that were actually going upstairs, to the fire, trying to get as many people out the building as possible,” he told the BBC.

Another resident, Zoe, who lives on the fourth floor, said she was woken by a neighbour banging on her door.

“The whole landing was thick with smoke. The smoke alarms weren’t going off but the way it spread so quickly from the fourth floor, all the way up to the 23rd floor was scary,” she said.

Refurbishment of the housing block had been completed last year and the Fire Brigades Union said something had gone badly wrong with fire prevention procedures at the building.

London Mayor Khan declared the fire as a “major incident” and said questions will need to be answered over the safety of such tower blocks.

“We can’t have a situation where people’s safety is put at risk because of bad advice being given or if it is the case, as has been alleged, of tower blocks not being properly serviced or maintained,” he said.

Grenfell Tower is managed by the Kensington and Chelsea Tenant Management Organisation on behalf of the local council.

The local Grenfell Action Group had claimed, before and during the refurbishment, that the block constituted a fire risk and residents had warned that access to the site for emergency vehicles was “severely restricted”.

Eyewitnesses reported seeing the building burning through to “its very core”.

Distraught relatives have been using social media to try and make contact with missing loved ones.

London fire: Death toll rises to 30; fears it could climb over 100