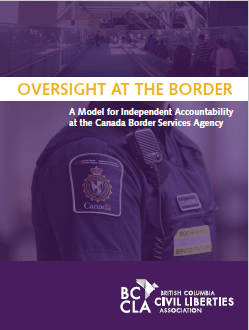 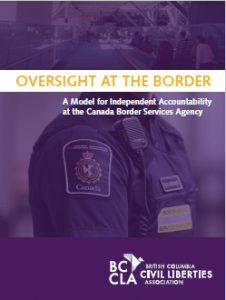 THE BC Civil Liberties Association (BCCLA) on Wednesday released a new report proposing a model that would provide independent oversight for the Canada Border Services Agency (CBSA).

The BCCLA is one of several human rights groups that have been calling for greater accountability of the agency for many years. In the report entitled Oversight at the Border: A Model for Independent Accountability at the Canada Border Services Agency, the BCCLA makes concrete proposals for both civilian oversight and review of CBSA’s activities.

“The government promised accountability for CBSA over a year ago. It’s time to act. The CBSA has extraordinary powers, including powers of arrest, detention, and search and seizure,” said Laura Track, a lawyer with the BCCLA and co-author of the report. “CBSA officers interact with extremely vulnerable populations, including refugees fleeing violence and migrants being detained in maximum security prisons. Yet unlike every other police agency with these kinds of powers, there is no independent oversight of CBSA officers’ activities. There is no formal and independent complaints process where individuals can register their concerns. There is no independent body with a mandate to look at the agency’s policies and practices to ensure they respect individual rights. It is deeply disturbing that officials with such wide-ranging powers are not subject to any kind of independent oversight.”

After the deaths of two migrants in CBSA custody within the span of one week last year, and in light of sustained advocacy from human rights and refugee groups, Minister of Public Safety Ralph Goodale committed to creating an independent accountability mechanism for the CBSA as part of the government’s reforms to the country’s national security framework. There are reported to have been 15 deaths in CBSA custody since the year 2000, and there have been serious issues of mistreatment and rights abuses in CBSA’s detention program and in other aspects of CBSA’s broad mandate.  The government is currently studying the issue of CBSA accountability, and reforms are expected soon.

In its report, the BCCLA recommends two separate accountability mechanisms for the CBSA, one charged with providing real-time oversight of CBSA’s policies and practices, and one charged with conducting investigations and resolving complaints. The report also details the necessary components to make these bodies credible and effective, including independence, broad jurisdiction, sufficient resources, the power to compel CBSA to provide information, and the power to make binding remedial orders. These recommendations are informed by interviews with lawyers, advocates, and service providers working with refugees and other newcomers to Canada whose experiences illustrate why independent oversight and accountability of CBSA is so badly needed.

“The Canadian Council for Refugees has long been calling for an independent and effective accountability mechanism for the CBSA,” said Loly Rico, President of the Canadian Council for Refugees. “BCCLA’s report provides helpful guidance to the government as they move to create a mechanism that truly responds to this most vulnerable population: non-citizens facing detention and removal from Canada.”

“People who work with refugees see first hand that CBSA officers – like any police – make mistakes, act unfairly, and even commit  human rights violations. These must be independently investigated to ensure that the rights of refugees and others are respected,” said Mitchell Goldberg, President of the Canadian Association of Refugee Lawyers.

“Independent oversight builds public confidence in law enforcement by assuring the public that officers are being held to the highest standards of professionalism and accountability,” noted Track. “The absence of an independent review body for the CBSA does the CBSA – and the public – a great disservice.”

The BCCLA said it has worked closely with the Canadian Council of Refugees (CCR) and the Canadian Association of Refugee Lawyers (CARL), in alliance with other civil society groups, to push for independent oversight of the CBSA. The BCCLA said it is grateful for the significant assistance provided in this report by CCR, CARL, and the University of Toronto Faculty of Law International Human Rights Program. The BCCLA thanked the Law Foundation of British Columbia for funding this report.