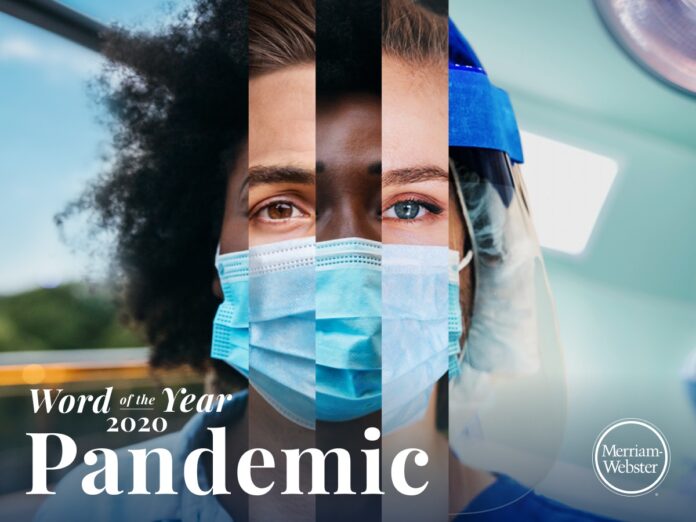 “The Greek roots of this word tell a clear story: pan means “all” or “every,” and dēmos means “people”; its literal meaning is “of all the people.” The related word epidemic comes from roots that mean “on or upon the people.” The two words are used in ways that overlap, but in general usage a pandemic is an epidemic that has escalated to affect a large area and population.”

Springfield, Massachusetts: Merriam-Webster, the dictionary publisher helping millions of people understand and use language better, has announced its Word of the Year for 2020: pandemic. While the COVID-19 pandemic that has defined 2020 in many ways might make the word seem like a natural choice, the selection is entirely data driven: pandemic was looked up at Merriam-Webster.com in 2020 with remarkable frequency throughout the entire year and in numbers that far exceeded 2019 lookups. In this exceptional year the data was exceptionally clear: the story of the year is the word of the year. Other words also stood out in the dictionary’s 2020 data, and they too shed light on the experiences and ideas that shaped the year.

Lookups of pandemic first spiked on February 3, when the first COVID-19 patient in the U.S. was released from the hospital, but close inspection of the dictionary data shows that searches for the word began to tick up consistently starting on January 20, the date of the first positive case in the U.S. That initial February spike in lookups didn’t fall off—it grew, with dictionary users looking up pandemic an average of 4,000% more in early March than they had been a year previous. The World Health Organization’s March 11 declaration “that COVID-19 can be characterized as a pandemic” pushed lookups into the ether: that day pandemic saw the single largest spike in dictionary traffic in 2020, increasing 115,806% over its 2019 lookups. The word remained high for the remainder of the year.

“Pandemic is the word that has connected the worldwide medical emergency with the political response and with our personal experience of it all,” says Peter Sokolowski, Editor at Large for Merriam-Webster. “Words that might be part of our general vocabulary send us to the dictionary when they suddenly seem technical, medical, or legal. The word pandemic, though familiar, came into the news this year with an urgent specificity.”

Gallery: Get more detail on all the 2020 Words of the Year

Other top lookups include malarkey, an old-fashioned word that’s a favorite of U.S. President-elect Joe Biden, and one he used several times during the presidential debate in October. The word is defined as “insincere or foolish talk.”

Entertainment and sports also inspired people to turn to the dictionary. The word kraken saw a large spike in lookups when Seattle’s brand-new National Hockey League franchise chose the word as its team name. Nomenclature was also behind searches for antebellum. In June, an award-winning musical trio announced a name change: “Lady Antebellum” would now officially be called “Lady A”; and in September a horror movie using the word as its title was released.

The dictionary’s data also opened a window onto the thoughts of people processing the loss of some prominent and beloved Americans. Mamba rose high in the lookups when basketball great Kobe Bryant, whose nickname was Black Mamba, died in January, and searches for the word icon climbed in reaction to the deaths of both Representative John Lewis in July and Supreme Court Justice Ruth Bader Ginsburg in September.

Podcast: Listen to Merriam-Webster editors discuss the Word of the Year

“The words that rise to prominence when we examine our data at the year’s end always say something about our collective experience. In this case, the Word of the Year is one that has truly touched us all. Pandemic is not only an important medical term; it’s likely that this period of time will be forever known by this word,” says Sokolowski.