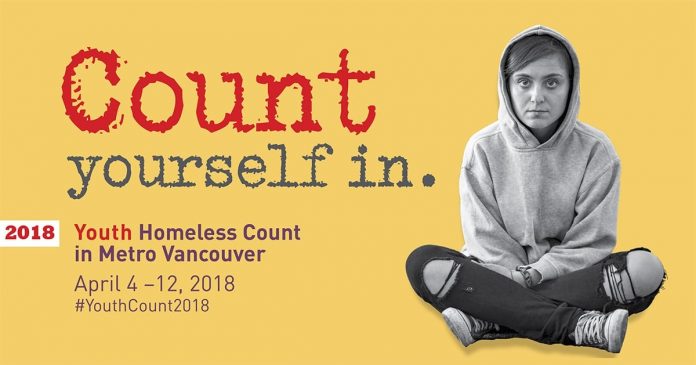 FOR the first time, a Youth Homeless Count is being conducted in Metro Vancouver.

The count will be held April 4 to 12 and is distinct from the regional homeless counts, which have taken place every three years since 2002, with the most recent held in 2017. While these triennial counts included youth, the actual extent of youth homelessness is likely much higher than the numbers suggest and the methodology can reach.

“Homeless youth are not the same as homeless adults,” said Lorraine Copas, Chair of the Metro Vancouver Homelessness Partnering Strategy Community Advisory Board. “They are often part of the ‘hidden homeless’ population, which means they are more likely to be couch surfing than out on the street or in a shelter. Through this count, we hope to better understand the causes and conditions of youth who are experiencing homelessness in Metro Vancouver.”

The Youth Homeless Count methodology will differ from the regional counts, which take place over a 24-hour period and involve hundreds of volunteers fanning out across the region to conduct surveys. Instead, anonymous surveys will be conducted over a nine-day period at youth centres, high schools, shelters and other youth-serving organizations. For the purposes of the count, people aged 13 to 24 are considered youths.

Many youth-serving agencies will also hold events where free food, transit passes and easy access to services are available to youth while taking part in the count. Social media will also be used to reach youth who may otherwise be unaware of the count taking place in their communities.

“By better understanding what leads youth into homelessness, service providers and governments can use their resources in the right places to help young people attain housing stability,” said Copas. “We hope this community-oriented approach will also help lessen the stigma associated with homelessness, which can affect a person’s willingness to participate in a homeless count.”

The Youth Homeless Count will be carried out by the BC Non-Profit Housing Association on behalf of Metro Vancouver, the Community Entity under the Government of Canada’s Homelessness Partnering Strategy. A Community Advisory Board of representatives from local governments, health authorities, and organizations representing the diversity of homelessness demographics provides oversight on the count.

The 2017 regional homeless count found a total of 378 youth under 25, which included 199 children under 19 years of age, 117 of whom were accompanied by their parents. Young people represented 16% of the homeless population in 2017 compared with 20% in 2014, making them the only age group where the count results showed a decrease compared to 2014. However, those serving youth estimate the number is much higher – it was this inconsistency that determined a closer look at youth homelessness was needed.

Submissions being accepted by Metro Vancouver for $150,000 in regional culture grants