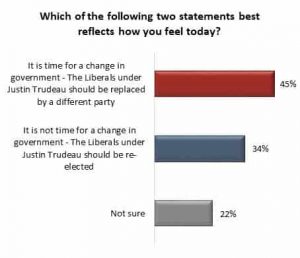 IT was a turbulent summer for Prime Minister Justin Trudeau and his government, which has faced criticism for its handling of the surge in irregular border-crossings in Quebec, the decision to pay Omar Khadr more than $10 million to settle his lawsuit against the government, and its proposed changes to small business taxation, noted the Angus Reid Institute on Thursday.

As this last critique of the Liberal government continues into fall, a new analysis of quarterly polling data – fielded by MARU / Matchbox and donated to the Angus Reid Institute – finds evidence that Canadian public opinion is changing with the autumn leaves.

While Trudeau retains the approval of half of Canadians, more respondents disapprove of his performance “strongly” (27%) than approve strongly (14%).

And, though Trudeau’s overall approval rating remains significantly higher than that of Conservative Opposition Leader Andrew Scheer, enthusiasm for Trudeau’s party lags behind support for its leader. For the second consecutive quarter, more Canadians say it is “time for a change” in government than say it is not, and

more now choose the Conservatives as the best party to lead in Ottawa than Trudeau’s Liberals.