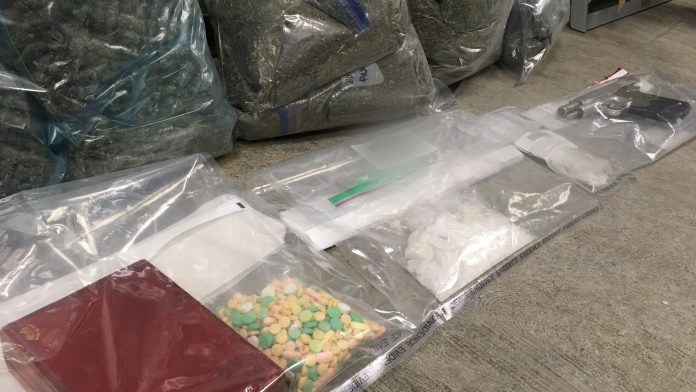 SURREY RCMP announced on Friday that multiple search warrants that were executed in mid-April at properties alleged to be involved in the street-level drug trade resulted in 13 arrests and the seizure of numerous weapons and significant quantities of drugs (see photo).

On April 19, officers with the Surrey RCMP’s North Community Response Unit (CRU) executed three simultaneous search warrants at residences in the 12900 block of 108th Avenue and 13300 block of Bentley Road. Police had gathered information that individuals were operating “store front” drug operations and were in possession of firearms at these locations.

With assistance from the Surrey RCMP’s Bike Team, Lower Mainland District’s Emergency Response Team, Police Dog Services, and Transit Police, officers arrested a total of 13 persons at these locations. A number of weapons were seized including multiple handguns and crossbows, along with varying amounts of drugs, including 1,100 doses of crystal methamphetamine, 400 doses of heroin / suspected fentanyl, and nine kilograms of marijuana.
The investigation is ongoing as officers work on submitting a comprehensive report to Crown Counsel. One individual, Adam Bruce Bogart, 32, of Surrey, has now been charged with three counts of possession for the purpose of trafficking, two counts of possession of a firearm, and breach of a firearms prohibition. Three other individuals were also detained on outstanding warrants.

“The Surrey RCMP continues to monitor, arrest, and disrupt the activities of multiple priority target individuals and locations associated to the street level drug trade,” said Staff -Sgt. Marty Blais, North Community Response Unit Commander. “We are committed to taking strict enforcement action against those who prey upon the most vulnerable in our community and pose a significant threat to public safety.”

Anyone with information about possible drug operations in Surrey is asked to contact the Surrey RCMP at 604-599-0502 or Crime Stoppers, if they wish to remain anonymous, at 1-800-222-TIPS or go to www.solvecrime.ca.