New Delhi (IANS): President Droupadi Murmu on Monday said her election to the top constitutional post shows that the poor can not only dream but also fulfill those dreams in India.

She was addressing the nation after taking oath as the 15th President of India. Chief Justice of India N.V. Ramana administered the oath.

Murmu started her speech by greeting people and said, “I humbly greet all the fellow citizens from this sacred Parliament, a symbol of the hopes, aspirations and rights of all the citizens of India. Your affection, trust and support will be my greatest strength in discharging my functions and responsibilities.”

Murmu thanked all MPs and MLAs for electing her.

“My election to the post of President is proof of the fact that in India, the poor can dream and also fulfil those dreams. Reaching this office is not my personal achievement but that of all the poor people in the country. It is the power of India’s democracy that a girl born in a poor tribal home could reach the topmost constitutional post,” Murmu said.

She noted that it is also a coincidence that her political career started when the country was celebrating its 50th year of Independence and today in the 75th year of independence, she got this new responsibility. 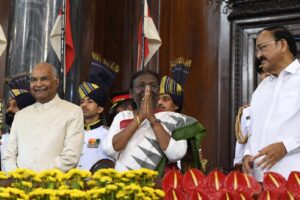 Murmu assured the countrymen, especially the youth and the women that their interests will be paramount for her while working in this office.

“I want to tell the youth of our country that you are not only building your own future but also laying the foundation of future India. As the President of the country, I will always support you fully,” she said. 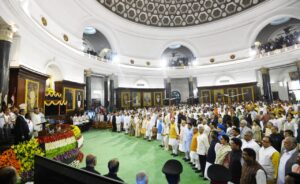 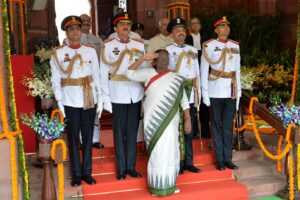