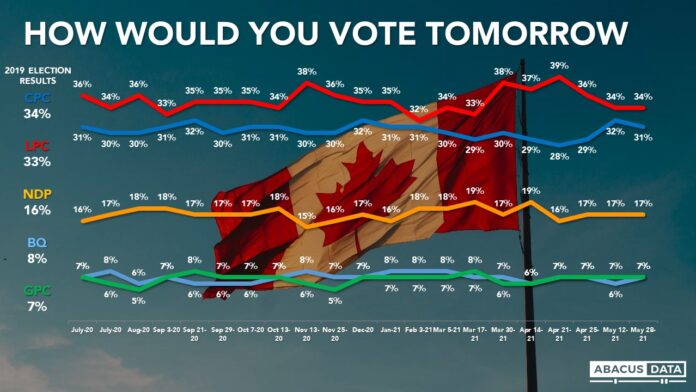 HERE are the key points from a new poll released on Monday by Abacus Data on the federal political landscape in Canada:

1 – The federal Liberals hold a 3-point lead over the Conservatives: Liberal 34, Conservative 31, NDP 17, Greens 7. This is largely unchanged from two weeks ago.

2 –  In the last five weeks, there has been a strong 12-point upswing in the number of people who say the country is heading in the right direction, from an ebb of 33% on April 21 to today’s level of 45%. Perceptions of how things are going in the rest of the world and in the US are also moving up during this period, which suggests a strong linkage with the improving outlook about the COVID-19 pandemic.

3 – Here in Canada, we’ve seen a striking 25-point climb in the number of people willing to believe that the “worst of the pandemic is behind us. This perception – held by 41% – is by far the highest measure of optimism we have seen since the pandemic began.The rise in optimism likely has a lot to do with the fact that many people are getting vaccinated. Those who’ve had at least one shot are 7 points more likely to say the country is going in the right direction, and 5 points more positive in their overall assessment of the federal government.

4- Federal performance on “getting vaccines delivered to Canada in a timely fashion” now finds more people (40%) giving the government excellent or good marks than offering poor or terrible ratings (30%). The remaining 30% give the Trudeau government an “acceptable” rating. This is a 15-point improvement in a six-week period.

5 – Asked which of the national party leaders they would like to see become Prime Minister after the next election, Justin Trudeau is the choice of 33%, roughly doubling the number who pick Conservative Leader Erin O’Toole (18%) and Federal NDP Leader Jagmeet Singh (16%). Green Party Leader Annamie Paul (3%) and Maxime Bernier (4%) are way behind.