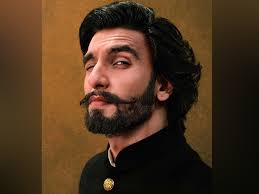 Mumbai (PTI): Amid widespread protests against “Padmaavat”, the film’s lead actor Ranveer Singh said today that he is proud to feature in a movie, the whole country can take pride in.

“Padmaavat”, directed by Sanjay Leela Bhansali, is set to release tomorrow but the controversies that sparked early last year when the film was in the making have not left it till date.

Ranveer, who will be essaying the character of Alauddin Khilji in the period drama opposite Deepika Padukone, who plays Queen Padmavati, took to Twitter to thank the praise coming his way, and said he is overwhelmed by “Padmaavat”.

“I saw ‘Padmaavat’ in 3D last night. I am so overwhelmed with the film at this point that words fail me. I feel immensely blessed.

“I am so proud of my team. Team ‘Padmaavat’ for the win! High tens and monster hugs to everyone. I am relieved and happy to the reactions to my performance. Thank you all for your kind and generous praise,” he tweeted.

The 32-year-old expressed his gratitude for Bhansali, saying he has shaped him into the artiste that he has become today.

“Sanjay sir has given me a gift of a character that I will forever be indebted to him for in my life, more than I already am. You have shaped me into the artiste that I am, sir. I love you.”

Without addressing the row surrounding the film, Ranveer requested people to give the film a chance, saying “Padmaavat” is something the country will be proud of.

“For me, the sheer toil of a film’s team has translated as magic on the big screen. And today on the eve of the release of a beloved film, I wish you all a Happy Republic Day in advance and invite you all to the cinema halls.

“I am proud to be a part of a film that our while country can be proud of. Jai Hind,” Ranveer wrote.

A school bus with children in it was attacked in Haryana, a fringe outfit in Uttar Pradesh declared a bounty on actor Deepika’s nose while roads were blocked at many places as violence spread to several states.

Amid widespread violent protests, led by Karni Sena, several theatre owners, including Rajasthan and Gujarat, have planned not to screen the Bhansali-helmed movie which also stars Shahid Kapoor playing a Rajpur warrior.

The fringe outfit’s chief patron Lokendra Singh Kalvi insisted that a ‘Janta curfew’ will be imposed on theatres that screen the movie.

Kalvi alleged that a dream sequence between the characters of Khilji and Rani Padmavati, which, he said, was “intolerable”.

The Supreme Court had earlier paved the way for its nationwide release after some states issued notifications banning the film. The movie, earlier titled “Padmavati” and slated for a December 1 release, will now hit theatres worldwide tomorrow.