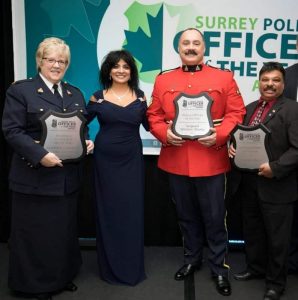 THE Surrey Board of Trade’s 21st Annual Surrey Police Officer of the Year Awards was held on Thursday, October 5 at the Sheraton Vancouver Guildford Hotel. 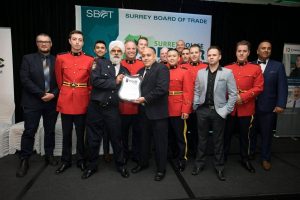 Dressed in red serge uniforms, many members along with Surrey’s auxiliary officers, civilian employees and volunteers joined members of Surrey’s business community to celebrate those chosen by their peers and the public as those most worthy to receive the two Police Officer of the Year awards, as well as awards for top Auxiliary Officer, most deserving municipal employee working with the police service, top volunteer and business partner. Master of Ceremonies Steve Darling of Sportsnet 650 kept the evening going with many laughs.

The 400-person gathering was addressed by Assistant Commissioner Dwayne McDonald, Officer in Charge of the Surrey RCMP, and Surrey Mayor Linda Hepner. Keynote speaker Jim Zorn of the Seattle Seahawks captivated the audience with his experience of leadership, team work and overcoming obstacles. 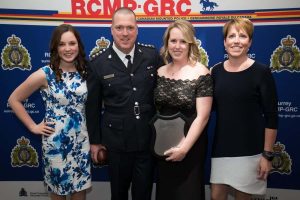 The winners were judged in the areas of: innovation, commitment, contribution and perseverance. Partial proceeds from the event go towards the RCMP Youth Academy. The Surrey RCMP Detachment, the largest in Canada and second largest municipal force in BC, has over 650 officers and hundreds of support staff.

2017 Surrey Police Officer of the Year Award Winners (full descriptions are noted below):

Arnold Silzer Community Policing Initiative Award
Surrey Outreach Team
The Surrey Outreach, a team composed of Bylaw officers and RCMP members, develops integrated strategies to address crime in a holistic manner in the 135A Street area, over the past 8 months. This has been achieved with a combination of community engagement, crime prevention initiatives and crime reduction strategies that have greatly impacted the local area. Created also to address the deaths that have been caused by the fentanyl crisis, the SOT is working diligently, sometimes under the harshest conditions, to ensure a difficult balance between the needs of the vulnerable on 135A Street and the protection of the community at large. The SOT has enhanced communication between the police, the community, Fraser Health and all local service providers, all trying to provide assistance to the most vulnerable.

Police and Business Partnership Award
Stephen Boyd
Stephen Boyd’s contribution, perseverance and leadership have enabled him to successfully run the RCMP initiative, ‘Think of Me’ (TOM), a program that educates students and motorists about the importance of safety within school zones. Stephen organized and promoted this program with school teachers and informed parents of the program through school newsletters. His understanding and passion of safe driving motivated the entire organizing team. Without his support and organization, the program would not be the success it is today. Stephen is an active player in bringing to life the vision of raising the profile of the Surrey’s RCMP’s positive community engagement through the TOM program.

Municipal Employee of the Year Award
Amanda Schenk
In December 2016, Surrey RCMP embarked on a complex theft investigation, where approximately $500,000 was stolen. Amanda Schenk was assigned to the Economic Crime Unit (ECU) file in March 2017 to assist with mapping and the analysis of phone records. At the time, investigators did not have enough evidence to pursue charges against possible suspects. Amanda analyzed thousands of phone records and identified patterns and trends. Her analytical findings rapidly advanced the investigation, allowing investigators to focus on a number of suspects. The work produced by Ms. Schenk on this investigation demonstrated a strong partnership between municipal Staff and the RCMP. Amanda continues to produce outstanding work and support to the Surrey Crime Analysis Section.

Volunteer of the Year Award
James Ram
James Ram became a volunteer with the City of Surrey in September of 2016. Since then, James has volunteered 200 hours and remains incredibly active and engaged in the volunteer program. James has been the main point of contact for weekend engagement events and leads in the organization and execution of both the Surrey RCMP Open House and Cloverdale Rodeo Cone Zone Events. James attended all the shifts over the Rodeo weekend and coordinated all of the volunteer shifts and responsibilities. James carries himself with a high level of professionalism, acts as a role model for other volunteers and demonstrates all the City of Surrey core values. James has shown incredible heart, dedication and commitment to the City of Surrey and the Surrey RCMP.

Auxiliary Constable of the Year Award
Auxiliary Constable Karen Summers
Karen Summers has been a member of the auxiliary team for the past 25 years. She works closely with Surrey RCMP District offices and steps forward to volunteer at a variety of community events. Karen brings enthusiasm and passion for community safety to each project. She is approachable and is always willing to help others. Her notable projects include Project SWOOP, an ICBC partnered-program, where multiple community agencies work together to educate and enforce safe driving around Surrey. Karen was quite willing to continue her participation in the auxiliary program, despite new restrictions, and is an asset to the team in Surrey. Her commitment and dedication is unparalleled, and even after 25 years, her service is unwavering.

Police Team of the Year Award
Youth Section
The Youth Section acts as a central liaison point for youth files within the Surrey RCMP. Through education and collaboration, the Youth Intervention Program has observed a 50% increase in referrals and the Restorative Justice Program has experienced a 70% increase. As a result, many more victims, youth, and families are able to access the support they need. In May 2016, the Youth Section collaborated with other Detachment personnel to pilot the innovative Surrey RCMP Parent Helpline. Using this Helpline, community members can proactively request police involvement, including a home visit from a Youth Section member, to form a plan to guide their children away from criminality. As a result, numerous Surrey families have been able to connect with counseling and mentorship before having negative contact with the police. RCMP leadership has taken notice of the positive work being done and has approved the expansion of the Youth Section to allow it to continue to flourish in prevention, intervention, education, and enforcement efforts.

Police Officer of the Year Award – Nominated by Peers
Sergeant Heather Matthew
Sergeant Matthew is the NCO in charge of the Vulnerable Persons Section, which contains the Police Units, Missing Persons, Integrated Mental Health Intervention, and Integrated Domestic Violence. She supervises 25 members, which include police officers and civilian employees. Sgt. Matthew is an outstanding example of a supervisor. She brings to every situation a calm sense of leadership and provides clear direction, delivering constructive feedback to her teams that is always well received. Sgt. Matthew was recently the NCO in charge of the Integrated Domestic Violence Unit, where she created an environment of innovation. Under her direction, the Domestic Violence Unit grew from 4 to 14 members and every member was made to feel welcome and always encouraged to contribute.

Police Officer of the Year Award – Nominated by Community
Sergeant Winston Shorey
Sergeant Winston Shorey is a team player that embraces new technology and supports the Cloverdale BIA email information-sharing program called “Heads Up”. He has also been informing the community on new ways to report crime, by teaching them to use a new RCMP Smartphone App. Sgt Shorey consistently updates the public through social media with timely information and always addresses issues as they occur. Winston works collaboratively with members of the community and the fire department to promote safety. He and his team can be found at all Cloverdale events like the Rodeo, various parades, car shows, and community festivals such as Market Days, the Chili Cook-off and Bed Races. He visits a great number of businesses and members in the community through outreach programs and coffee shop meetings. His positive outlook on policing and keeping Cloverdale safe is his priority.

THE NDP says that earlier this year, B.C. Liberal Leader Andrew Wilkinson made his position clear: he thinks the richest 1% of...
Read more

THE Federal Bureau of Investigation (FBI) and the Cybersecurity and Infrastructure Security Agency (CISA) are have issued an announcement to raise awareness...
Read more