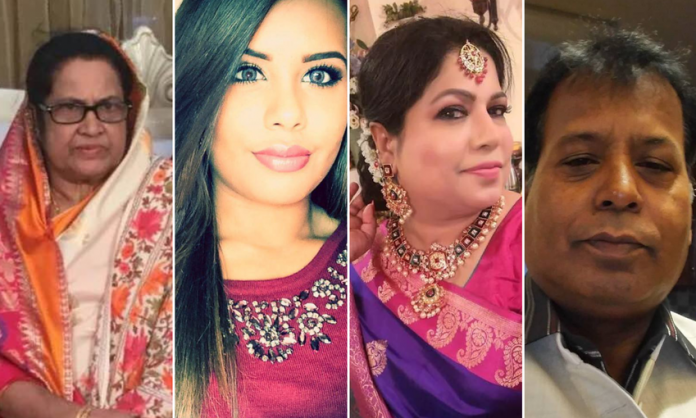 INVESTIGATORS with the York Regional Police Homicide Unit on Wednesday released the identities of the four victims killed last Sunday at a residence in the City of Markham.

Following the post mortem examinations by the Office of the Chief Coroner, the victims have been identified as 70-year-old Firoza Begum, 50-year-old Momotaz Begum, 59-year-old Moniruz Zaman, and 21-year-old Malesa Zaman, all of the City of Markham.

Media reports say that the family is of Bangladeshi origin.

The cause of death has been determined but will not be released in this investigation to protect the integrity of the case before the courts, police said.

On Sunday, July 28, shortly before 3 p.m., York Regional Police were called to a residence on Castlemore Avenue, just east of Mingay Avenue for a report that multiple people had possibly been injured. When officers arrived they made contact with a man at the front door who was taken into custody. A further search of the residence found four people, all of whom were dead.

Investigators have charged the 23-year-old man, Menhaz Zaman, who was taken into custody at the scene, with four counts of first-degree murder.

Zaman is scheduled to appear in the Ontario Court of Justice in Newmarket on Friday, August 2.

The Toronto Star reported on Tuesday that hours before Menhaz Zaman was arrested, “an international online gaming community grew increasingly alarmed by the messages of one of its members, and started reaching out to Canadian police authorities, realizing the disturbing claims made by a user named “Menhaz” may not have been just talk.”

Maroon Ayoub, an administrator of a popular online gaming chat app forum for the multiplayer online game Perfect World, told the Star in messages from Israel that a fellow forum administrator began attempting to contact authorities early Sunday morning after a user named “Menhaz” began sending concerning private messages to some users about his family.

In the postings, “he described being depressed and having lost faith in God, lying to his parents about going to university and dropping out of an engineering program after failing classes. He wrote that he had told his parents he would be graduating from university July 28,” the Star said.

But the members of the forum had little information about where Menhaz lived. Ayoub told the Star: “They only knew of the act and that he is Canadian. The admin did pull out Menhaz’s IP (Internet Protocol address) from our database but apparently it wasn’t the one needed.”

CBC reported that a video gamer in Tunisia said he hasdturned over to Toronto-area police disturbing messages and images that Menhaz allegedly posted online.

The Tunisian man, who didn’t want to be identified, said he often played video games on a private server called Perfect World Void with Menhaz and was one of dozens of players who saw his messages on a third-party app gamers use to chat with each other. In those messages posted last Sunday, Zaman claimed he had killed his family, the Tunisian man alleged.

“I’ve slaughtered my entire family, and will most likely spend life in jail if I manage to survive,” says one of the messages a user named “Menhaz” posted on the chat, CBC reported.

“When some players expressed disbelief, the Tunisian player said, Zaman posted several photos that he claimed showed his victims.

“The gamer said he reached out to police in Canada to alert them to the disturbing postings, which he has also shared with The Canadian Press. One of the photos shows a young man holding a large bloodied kitchen knife,” CBC said.

“I didn’t sleep or drink for two days, not because of graphic content, but just kept asking the question ‘why’ over and over,” he told The Canadian Press in a Facebook message. “I’ve already called York Regional Police and Crime Stoppers … and sent them everything I have.”

The Tunisian man, who also moderates the private gaming server, said any disturbing messages posted to the site in the future will be reported immediately to the authorities, CBC reported.

A GoFundMe page was started to cover funeral costs: www.gofundme.com/f/malesa-zaman-funeral-fund. By Thursday afternoon it had collected $20,703 of its $20,000 goal.