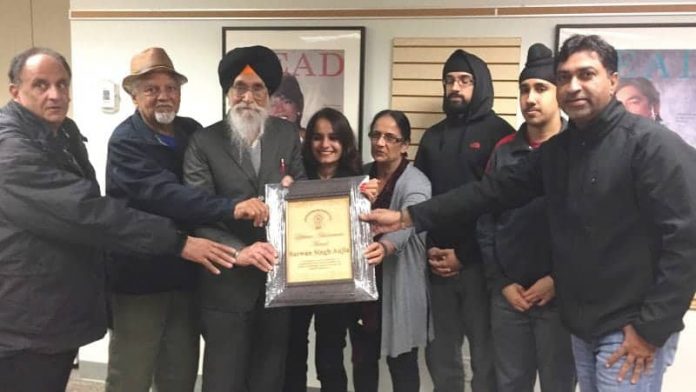 THE Vancouver-based Indians Abroad for Pluralist India (IAPI) honoured Sarwan Singh Aujla, a retired school principal from Punjab and an author for keeping the story of Rehmat Ali Wajidke alive.

Wajidke was a member of the Ghadar Party that was formed in North America in 1913 by Indian immigrants to fight back against British occupation of their home country and racism abroad. He was hanged in 1915 for his participation in the conspiracy to overthrow the British Empire after returning to India.

His family had migrated to Pakistan after it was separated from India in 1947 on religious lines.

Aujla had served at the government public school in Wajidke, the native village of Rehmat Ali.

He was instrumental in getting the school renamed after the Ghadar hero and had also traced his descendants in Pakistan and brought them to India where they were duly honoured by the Punjab government in 1970s.

Aujla has also authored a book on Wajidke and has been highlighting his story through his columns in the local newspapers as well.

On the occasion of 70 years of the partition when hostilities between the two countries have grown, Aujla was honoured to recognize his contribution to strengthening cross-cultural bondings and human relationships, beyond religious and nationals boundaries at a public event held in Surrey on Thursday evening.

Aujla who shared his story on the occasion called upon the people of India to carry forward the struggle of Ghadar Party for a secular and egalitarian society and denounce attacks on religious minorities.