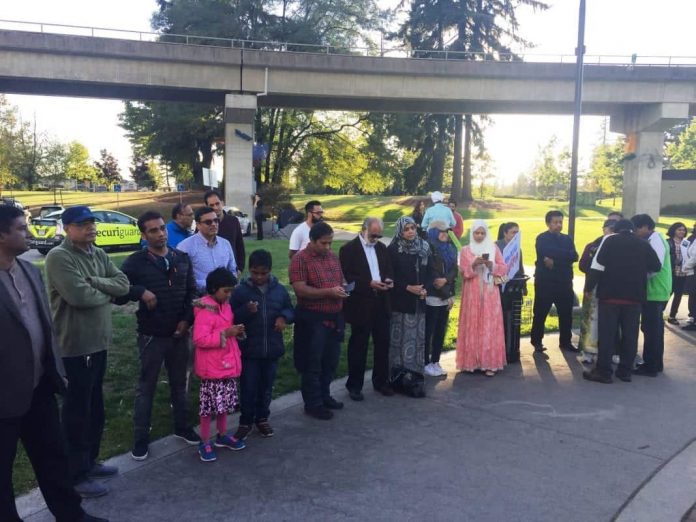 SOUTH Asian demonstrators showed up at a rally for Rohingya refugees at Surrey’s Holland Park on Saturday evening. Surrey Centre MP Randeep Singh Sarai (Liberal), in whose riding the demonstration took place, was also in attendance.

Sarai spoke in solidarity with the victims of ethnic cleansing in Myanmar. He also received a letter addressed to the Prime Minister Justin Trudeau asking for his immediate intervention in the matter. Signed by scores of residents of Greater Vancouver, the letter was presented to him by the organizers – Indians Abroad for Pluralist India (IAPI), who demanded that the honorary citizenship given to Aung San Suu Kyi by Canada be revoked for her complicity in the repression of Rohingya Muslims.

The IAPI also wants the Canadian government to press upon the Government of India to take in Rohingya Muslims who face deportation under pressure from Hindu extremists.

Others who spoke on the occasion included Yasmin Ullah and Abu Hafiz Ullah Jamal who had organized a rally for Rohingyas in Vancouver last Sunday. Yasmin, being an immigrant from Rakhine that has witnessed large-scale violence against Rohingya Muslims by the army and Buddhist extremists, shared her story.

Khalsa Aid supporter and an independent TV broadcaster Harpreet Singh also spoke at the event. Khalsa Aid is an international relief agency that came under attack from the Hindu right for organizing camps for Rohingya refugees on the border of Bangladesh and Myanmar.

The IAPI co-founder Gurpreet Singh, veteran Communist activist Harjit Daudhria, Bhupinder Malih from People’s Front and BC Muslim Association President Dawood Ismail were among other speakers at the rally that was attended by women, children and seniors carrying placards bearing slogans against genocide.