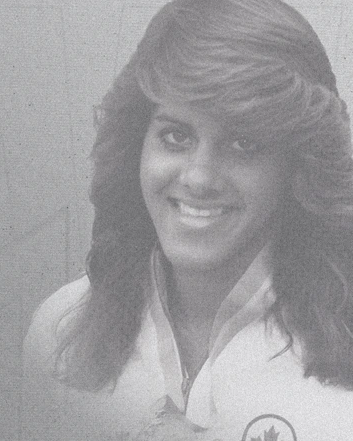 PAMELA Rai made history many times over during her two seasons with the Victoria Vikes swimming team between 1984 and 1986.

The record-breaking swimmer was inducted Thursday in the Canada West Hall of Fame, becoming the second swimming inductee after fellow Olympian Erica Morningstar was honoured earlier this week.

After winning gold in both the 400-metre freestyle and 100 metre butterfly at the 1985 national championships, the native of New Westminster, B.C., shattered Canada West and CIAU records in 1986.

At the 1986 national championships she won the 100-metre freestyle and 400 metre freestyle events in record times, and also claimed gold in the 100 metre butterfly.

ACCORDING to the BC Sports Hall of Fame website:

Born in New Westminster, Pamela Rai spent most of her early years in the pool. Beginning her fourteen-year swimming career with the Surrey Knights Swim Club, she was by the age of six enjoying competitive swimming with her brother Rajan, and her sisters, Michelle and Sharon. At nine years old, already showing great promise, she transferred to the New Westminster Hyack Swim Club to be coached by fellow BC Sports Hall of Famer Ron Jacks.

Her affinity for sprinting became evident as she excelled in the 50m and 100m freestyle, as well as the 100m butterfly at the national level. By the age of fourteen, Rai established herself as a champion, holding sixteen Canadian age-group records.

Rai’s seven years on the national team began at the 1980 Canadian Olympic trials in Toronto, where, racing against much older competition, she placed third in the 50m freestyle. In 1981, Rai won six medals, including gold in the 50m freestyle at the Canada Games. The same year, at an international meet in Tokyo, she won a silver medal as a member of the 4x100m freestyle relay team. In 1983, Pamela went on to win silver at the Pan American Games in Venezuela and a gold medal at the Hapoel Games in Israel, both in the 4x100m freestyle relay.

Finally, in 1984, Rai’s longtime dream of an Olympic competition came true as she represented Canada at the Los Angeles Olympic Games. In one of the proudest moments of her career, Rai and her Canadian teammates stood on the podium to receive an Olympic bronze medal, won while setting a new Canadian record of four minutes 12.98 seconds in the 4x100m medley relay. With the bronze, Rai became the first woman of Indian ancestry to win an Olympic medal.

While swimming for the University of Victoria under Dr. Peter Vizsolyi (1984-86), Rai set five new Canadian university records and was named the 1985 Canadian University Swimmer of the Year. Also in 1985, at the prestigious Pan Pacific meet in Tokyo, she earned a bronze medal in the 4x100m freestyle relay.

Before her retirement from competitive swimming in 1986, Rai, once again on Canada’s 4x100m freestyle relay team, won gold at the Commonwealth Games in Edinburgh, Scotland, helping to set a Canadian and Commonwealth record at three minutes 48.45 seconds.

Following her last major competition at the world aquatic championships in Madrid, Spain, Rai finished her university studies, and continued her involvement in swimming by coaching clubs in Delta, North Vancouver, Courtenay, and Manama, Bahrain.