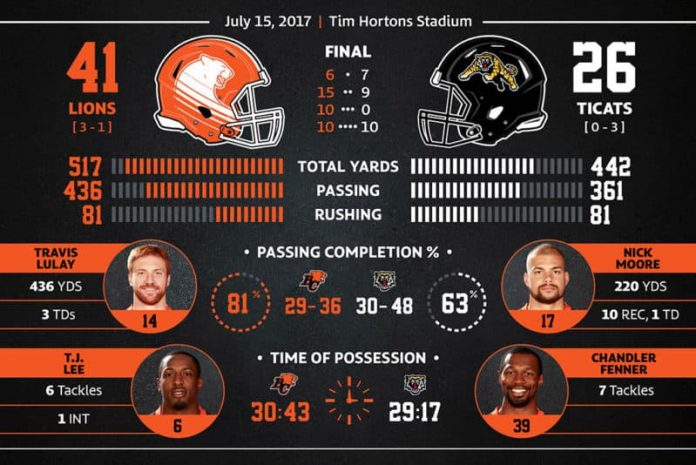 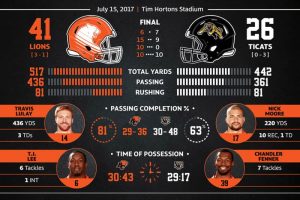 Hamilton, Ontario: Injuries, career high-highs and another stellar performance in the east. Your BC Lions survived the loss of Jonathon Jennings to a shoulder injury and improved to 3-1 with a 41-26 win over the Hamilton Tiger-Cats at Tim Hortons Field. Travis Lulay stepped in and threw for 436 yards- the most ever from a QB off the bench in CFL history- and three touchdowns, while Nick Moore hauled in a career-best 220 yards and a touchdown.

The visitors overcame three first half turnovers to win their ninth consecutive road tilt in Eastern Canada; a streak that dates back to September 3rd, 2015.

After trailing 13-6 heading into the second quarter, Lulay and the offence came alive with an eight-play, 95-yard touchdown drive that ended with the quarterback’s one-yard plunge.

They tacked on another score to lead 21-16 at the half when TJ Lee’s interception led to a Moore’s end zone grab.

They completely took over the game in the third quarter and extended their lead when Bryan Burnham made an unreal, circus one-handed touchdown grab to put them ahead 31-16 with 15 minutes to play.

Jeremiah Johnson’s fourth quarter score was icing on the cake.

“The first two plays I got hit pretty good and that kind of jarred my senses into the game,” said Lulay outside the victorious locker room.

“I thought Khari did a really nice job as the game went on of getting a feel for what they were doing offensively. I think that’s a good indicator of our potential on offence. It was a big win.”

Moore’s production tied him for 12th all-time in single-game receiving yards for the club, just one yard behind Geroy Simon. It came almost one year to the day of him suffering a torn ACL in Saskatchewan last season. Moore was also playing with a heavy heart after the passing of one of his friends earlier in the day.

“I just wanted to come and put it all on the line for my team,” said Moore on his night.

“We were shooting ourselves in the foot with turnovers in the first half and we knew Lulay was going to step in and do what he does. This was our goal from the start to go 3-0 on this trip.”

“I can really relate to Nick. An ACL on a receiver is like a shoulder on a quarterback so I know what he went through,” added Lulay.

“I have always been a big Nick Moore fan. We have a comfort level, a familiarity. He really came along in 2012 and in 2013 he was my guy. It was really fun to be on the field with Nick.”

Jennings was injured on the Lions’ first play from scrimmage on a hit from Davon Coleman and will be re-evaluated when the team returns home. Next up is a Western Division showdown with the Winnipeg Blue Bombers on Friday, July 21st at BC place.

12.4- The average number of yards on second down plays for the Lions in this one. That is pretty remarkable how they were able to stay on the field as the night went on.

Lulay passed Tim Cowan (385 yards in 1985) for the most yards off the bench in Lions history. He broke Mike Kerrigan’s previous CFL record of 408 yards set in 1987 as a member of the Tiger-Cats. In addition, Lulay’s 400-plus yard game was the 18th in franchise history.

“One on one coverage, Lulay put the ball up for me, I tried to keep myself from falling down and the ball ended up in my hands. That’s just my mentality. You have to take advantage of every opportunity because any play can be your last. It’s up there (for the nicest catch I ever made), definitely one of the best for sure.”- Burnham on his highlight reel touchdown.

Wally Says- “It’s about the whole team, not just one player. I thought it was a great team win, all three facets stepped up when they had to and the most impressive thing was Travis coming off the bench and putting up 41 points and I don’t know how many yards in offence. We kept our composure, just before the half we scored the quick 14 points and that made a difference.”- Coach Buono on pulling out the W.

Although the offence will garner most of the headlines, you have to credit the defence for clutching up. Solomon Elimiman yelled “No More!” on the sidelines when it was 13-6 and he was pretty much spot on. They did not allow the Tiger-Cats to record a single first down in the third quarter. You could tell Zach Collaros and company were frustrated.

The offensive line deserves kudos for getting better as the game went on. Lulay didn’t have a whole lot of wiggle room early and there was a holding call that helped snuff out one of their drives, but overall you have to give Dan Dorazio’s unit an A grade in week four.

You have to be satisfied with how they took the momentum right back with Johnson’s fourth quarter touchdown. The crowd was back into it when Hamilton pulled to within ten and giving them the ball back would have potentially made things interesting. Credit to Jones and the play calling indeed.

It has been great to see Elimimian dominate this season, but also refreshing to have youngsters like Thompson and Fenner lead the way on defence. Both of those guys have taken training camp opportunities and run with them. It may have seemed risky to juggle the secondary like they have. So far it has paid dividends.

That Burnham catch: play of the year material. Enough said.

NEXT UP! The Lions return home to host the Winnipeg Blue Bombers on Friday, July 21st. Kickoff: 7:00pm. Presented by Nissan. Get tickets here.

DURING the COVID-19 crisis, the border has been closed to all nonessential traffic, and the RCMP's Federal Border Integrity - ShipRider Program...
Read more