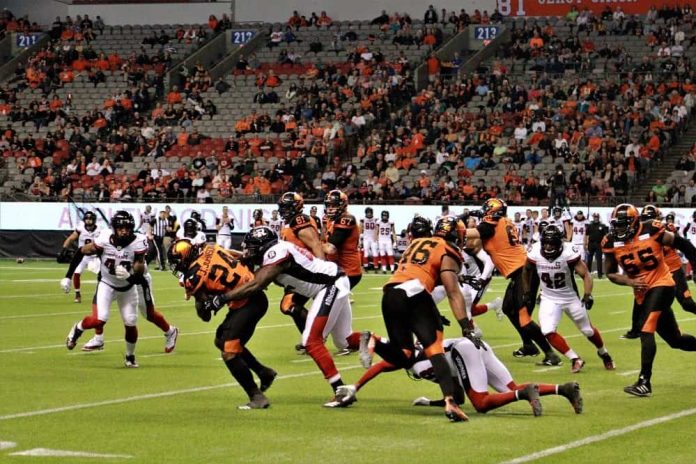 THEY overcame both the loss of their starting quarterback and starting centre and had to battle through a stalemate for much of the second half. In the end, the BC Lions (4-6-0) were on the winning end of a 26-14 result against the East Division-leading Ottawa Redblacks ( 6-5-0) on Friday night.

For Jennings, it was no doubt a moment he was hoping he’d soon get to experience after losing the starting job to his friend eight weeks ago.

“I’m just glad we got the win honestly,” said Jennings in a victorious home locker room.

“Teammates believe in both me and Travis and that’s been the greatest thing. We’ve got two great quarterbacks and Wally has said we will need both of us. To get it done, to get the win, that meant a lot to all of us.

“By the time I came back out on the field I felt pretty good,” said Lulay.

“I got to the point where I warmed up, I started doing some physical stuff and I felt good and fine. I think I would have been an option if say Jon would have gotten hurt in the fourth quarter, but we didn’t have to make that decision.”

Lulay found Ricky Collins Jr. for the game’s first major, a big early statement after the offence was granted a short field courtesy a punt block by Mitchell Barnett.

The home side could have led by more after they failed to execute a fake field goal, but still managed to take a 10-1 advantage to the locker room at halftime.

Jennings admitted as the game went on, he had to shake off the odd bout of jitters.

“You’re always going to have a little bit of nerves when you get back out there for the first time,” added Jennings.

“It felt good to get back out there. Once you’re on the field, it’s go time so the nerves have to be gone.”

Jennings credited the entire offence for how they came together and made sure they kept their foot on the gas pedal until the final whistle.

“That was huge. The O-line did a tremendous job,” explained number 10.

“At the end of the game you need the O-line to step up, make those holes and you need the running back to make plays. That’s what we did. Two key drives that really put the game away for us and that was huge. The defence played a heck of a game as well.”

Along with holding quarterback Trevor Harris to just 81 passing yards in the first half and sacking him six times, the defence forced three critical turnovers that led nine points.

Centre Cody Husband was taken for X-Rays after injuring his leg on the first play from scrimmage. Wally Buono indicated Peter Godber, who didn’t dress tonight, would be given a long look to possibly start in Husband’s place next week. Veteran Chris Greaves handled the snapping duties after Husband went down in this one.

Next man up is what it’s all about. Now the challenge will be to keep the momentum going an earn their first two-game winning streak since July of 2017.

“To us, every game is a playoff game from here on out,” added Lee.

“Once we celebrate in the locker room, once we leave here, it’s gone. Next game, next opponent.”

Said Jennings: “You’ve got to start somewhere. To get the win tonight was huge and now we hope to keep on building from this.”

Your Lions visit the Montreal Alouettes on Friday at Percival Molson Stadium.

6- the sack total recorded by an opportunistic Lions’ defence.

3- the number of interceptions by Mark Washington’s group. Winson Rose, Bo Lokombo and Anthony Thompson each had one.

52- the percentage of second down conversions (11/21) made by the Lions’ offence.

105- Collins’ receiving yards, his highest total of the season.

14- consecutive home field goal attempts made by Ty Long, dating back to September of last year.

Buono on his team overcoming injuries and adversity to get a big win: “I’ve never felt that this team has quit or that it was ever an issue. A guy like JJ standing up and making plays and helping us win, that’s great for his confidence, great for the team’s confidence. The injuries, unfortunately, are part of the game.Chris Greaves had to come in, had to overcome all the bad snaps and stuff, and I thought he did. This is not something we haven’t practiced. The thing that I appreciated is they kept their composure.”

Buono quickly brushing aside the notion of a quarterback controversy: “There’s no decision to make. Travis still gives us, I believe, the best chance to win but it was good to see Jonathan step up and get some confidence.”

The Lions will aim for their first road win of 2018 when they visit the Montreal Alouettes on Friday, September 14th at 4:30 PM. Fans are encouraged to head to the downtown Vancouver Shark Club for our viewing party.