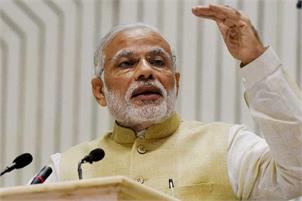 Sitharaman, who was holding the Commerce portfolio (Independent charge), was today promoted to the Cabinet rank as were Goyal, Dharmendra Pradhan and Mukhtar Abbas Naqvi.

Goyal replaced Suresh Prabhu who had earlier offered to resign as Railway Minister after a series of derailments.

Prabhu has been shifted to commerce and industry ministry.

Another gainer in the latest round of reshuffle was Road Transport and Highways Minister Nitin Gadkari, who was given the additional charges of the water resources, river development and Ganga rejuvenation, which was with Uma Bharti.

Bharati has been shifted to Ministry of Drinking Water and Sanitation.

Minister of State for Information and Broadcasting Rajyavrdhan Rathore too gained after the rejig and got the Sports portfolio (independent charge).

Santosh Kumar Gangwar too gained and got the Labour and Employment Ministry with independent charge. He was serving as the MoS finance.

Among others, Giriraj Singh got the Independent charge of Micro, Small and Medium Enterprises. He was serving as the MoS in the ministry.

Smriti Irani retained her Information and Broadcasting Ministry besides the Textiles Ministry.

She was given the additional charge of Information and Broadcasting Ministry in July after M Venkaiah Naidu was named NDA’s vice presidential candidate.

Cabinet minister Harsh Vardhan, who was given the additional charge of the Environment Ministry following the demise of Anil Dave in May, continues to hold the portfolio.

Vijay Goyal, who was stripped off the Sports portfolio, is seen as the loser in the reshuffle as he will now serve as the junior minister in Parliamentary Affairs and Statistics and Programme Implementation.

Mahesh Sharma has to give away the portfolio of tourism (independent). He retains the Culture Ministry (independent charge) and will also work as the Minister of State of Environment, Forest and Climate Change.

THE reshuffle turned out to be an all-BJP affair as its allies were not a part of the exercise.

It was expected that its new partner, the JD(U), would get representation in the central government, but it turned otherwise.

JD(U) spokesperson K C Tyagi said his party was not invited to join the government.

The Shiv Sena too was unhappy with its non-inclusion in the Cabinet, stating that the NDA was “almost dead” and that BJP remembered it only when it needed some support.

Though a long-time ally of the BJP, the Sena has often been at loggerheads with the senior partner. Its lone member in the Union Council of Ministers is Heavy Industries Minister Anant Geete.

Sources in the BJP said that members of their alliance might join the government later as there was still a scope for expansion of the Union Council of Ministers.

They, however, added that a decision on the allies joining the government would be taken later.

Irani removed from I&B, Goyal gets additional charge of finance in cabinet reshuffle