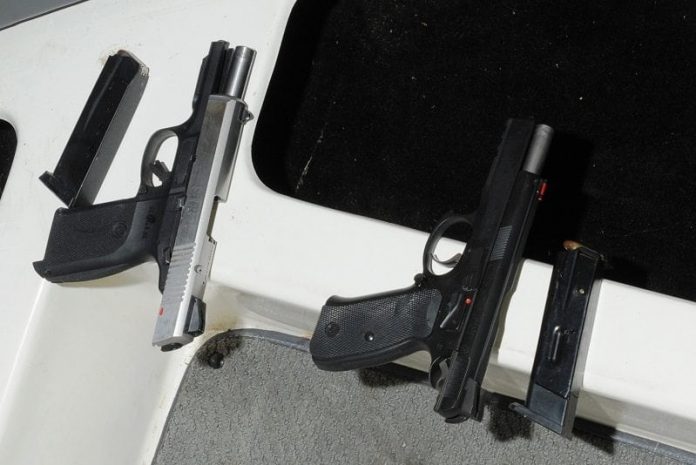 SURREY RCMP have arrested one man after an alleged residential break and enter in the Fleetwood area of Surrey that led to the seizure of firearms and the recovery of several thousand dollars worth of stolen property.

On January 6, Surrey RCMP was called after a residential break and enter in the 11200-block of 163rd Street.  The homeowners reported that approximately $15,000 of property had been stolen.
Surrey RCMP’s Property Crime Target Team (PCTT) took the lead in this investigation.  Officers received information that some of the stolen property was located at a store in Langley.  Investigators were able to retrieve one item and identify a possible suspect, 46-year-old Richard Thompson.  Further investigation led police to the 34000-block of Larch Street in Abbotsford.

On January 23, officers from PCTT executed a search warrant at the Abbotsford address and among the seized property were six firearms, suspected illicit drugs and scales, and stolen electronics. Four of the firearms are believed to have been stolen from other break and enters throughout the Lower Mainland. Thompson was arrested in the house when the search warrant was executed.

He is now charged with one count of each of the following offences:

Thompson appeared in court and was released on bail with conditions. Investigators are still reviewing the evidence and there is potential for more charges to be laid.

“This is a significant seizure of stolen property including several firearms,” said Cpl. Scotty Schumann.  “We’re glad to get some of the property back to it’s rightful owners and, thanks in part to the Abbotsford Police and the Langley RCMP, reduce the potential for these firearms to be used in other crimes.

“While conducting the search of the Abbotsford property, officers were approached by residents in the neighbourhood that related what they believed was criminal activity but hadn’t notified police.

“The Surrey RCMP reminds the public to trust your intuition and call your police or CrimeStoppers when you see suspicious activity in your neighbourhood.”

In 2017, Surrey saw a 24% decrease in residential break and enters. Despite this decrease, police say they still see a number of preventable break and enters that involve insecure premises and garage door openers.