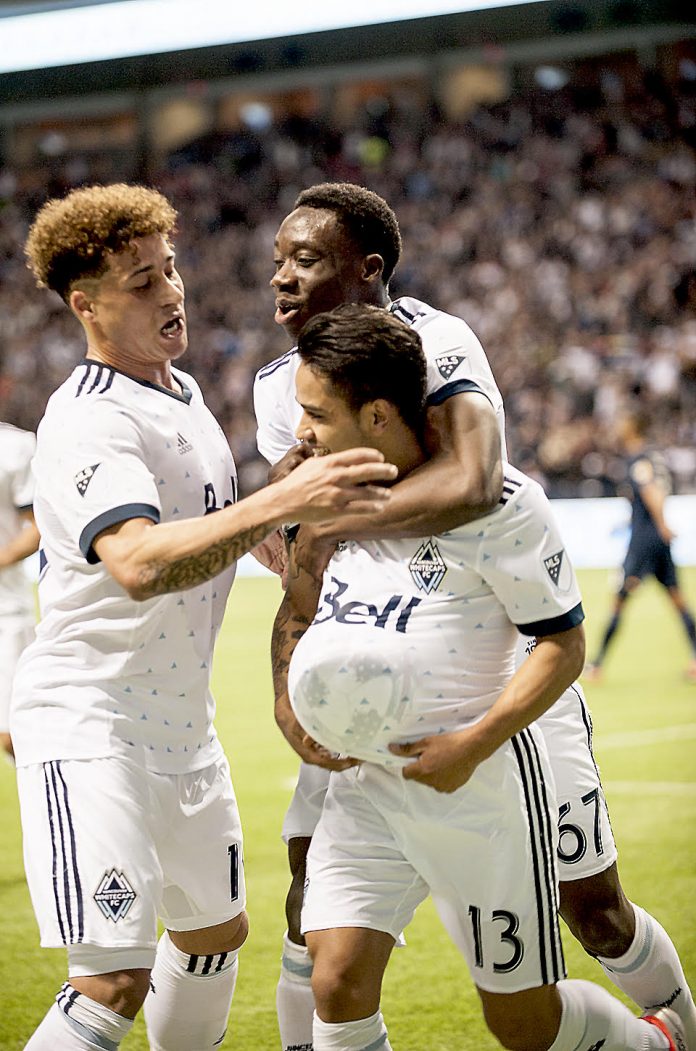 VANCOUVER, BC – Fredy Montero, Matías Laba, and Cristian Techera led a second-half offensive onslaught in front of 25,083 fans as Vancouver Whitecaps FC (1W-2L-1D) won 4-2 against LA Galaxy (1W-3L-0D) in a wild Saturday evening at BC Place.

Montero tallied a goal and an assist in a span of two minutes in the second half, and Laba registered his first brace while playing his 100th MLS match in a Whitecaps FC uniform. Not to be outdone, Techera’s lively play right from the opening whistle caused all kinds of havoc for LA throughout the night.

The roller coaster of a match saw three lead changes. Techera’s first goal of the season gave Whitecaps FC the early lead, before Galaxy off-season acquisition Romain Alessandrini’s levelled the match, then scored a second to give his side the advantage heading into halftime. This set the scene for a second-half attacking display from Montero and the ‘Caps.

With a busy week ahead, head coach Carl Robinson elected to make five changes to his lineup in their last outing, including the return of David Ousted in the Vancouver net.

It was Galaxy goalkeeper Clément Diop who was busy early, however, as Techera was buzzing from the get-go. After his earlier attempt was denied by the LA keeper, the Uruguayan winger put Vancouver up 1-0 in the 19th minute, set up by a diagonal long through ball from Sheanon Williams. Techera collected the pass outside the top of the 18-yard box, turned and swept the ball with his left foot toward the Galaxy net before Diop, who came off his line to meet the threat, could dispossess him.

Alphonso Davies nearly doubled the Vancouver lead just four minutes later when he got behind the Galaxy defence on a breakaway, but contact with a sliding Jelle Van Damme caused the 16-year-old attacker to lose his footing, snuffing out the chance.

LA would equalize moments later when Alessandrini attacked on the right side and hit the near post with a left-footed shot. With Ousted sprawled on the turf to make the save, the ball took a bounce off the top of the goalkeeper’s head and crossed the line into the net, tying the match in the 26th minute.

The Galaxy would capitalize again on 30 minutes. Striker Jack McBean initiated the attack with a ball to Emmanuel Boateng on the left side, who then fed Alessandrini at the top of the box with a well-timed pass. The French Designated Player was clinical with his left-footed one-touch finish, giving the Galaxy the 2-1 lead.

The first half would end with a flourish when the ‘Caps caught Diop out of position again, as the goalkeeper released to meet a long forward pass. Davies took possession of the loose ball and found Techera on the left wing, but the diminutive midfielder was forced into an off-target attempt by a number of oncoming defenders.

The fireworks did not end there.

Entering the match as a halftime substitute, Montero scored his first MLS goal for the ‘Caps in the 66th minute, pouncing on a rebound. It was Techera once again testing Diop, who parried the attempt away but directly to Montero’s direction. The new ‘Caps DP got two touches on the ball without letting it hit the ground, slotting in the equalizer in exhilarating fashion.

And just a minute later, the ‘Caps would wrestle the lead back when Montero, threatening on the left side, found Laba at the top of the box, where the Argentinian midfielder blasted a rocket for the 3-2 ‘Caps advantage.

After Christian Bolaños was denied of a score by an Ashely Cole clearance off the line, Vancouver got the insurance goal in the 87th minute when Laba headed in his second tally of the match on a rebound. Diop made the save on an initial Montero attempt, but Laba swooped in to put the ball back into the net, for the final score, 4-2.

With their first win of the young MLS season, Whitecaps FC now turn their focus to the CONCACAF Champions League as they host Tigres UANL at BC Place on Wednesday, April 5. The reigning Mexican champions hold a two-goal advantage heading into the second and decisive leg of the semifinal series, and the ‘Caps will need a three-goal win to advance, or a 2-0 scoreline to extend the matchup to extra time.

For every ‘Caps corner kick at home, McMillan donates $100 to the United Way. An additional $500 is donated for every goal scored off a corner kick. This match McMillan Corners for Kids has donated $700 for a running total of $1,200.