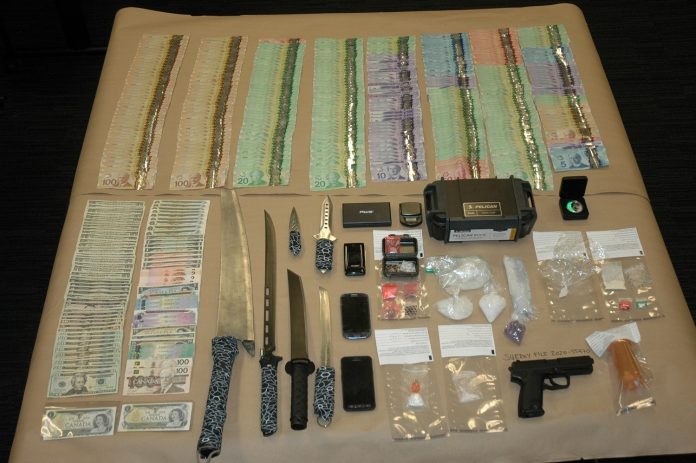 A stash of illicit drugs, weapons and cash has been seized from a Newton residence following an investigation by the Surrey RCMP Community Response Unit (CRU).

The investigation began on March 27, after Surrey RCMP received a tip from the public regarding suspected drug trafficking. The Community Response Unit took conduct of what became a month-long investigation, culminating in the execution of a search warrant on April 28 at a residence in the 6000-block of 140th Street.

As a result of the investigation, officers seized over $15,000 and $275 USD in cash, knives, swords, an imitation (air-soft) gun and alleged drug trafficking paraphernalia. Suspected illicit drugs in various quantities including methamphetamine, fentanyl, cocaine and pills were also seized from the residence (see photo).

Four adults, two males and two females, inside the residence were arrested and subsequently released pending further investigation. No charges have been laid at this time.

“This is another example of how the community can play a significant role in helping us keep the community safe,” said Community Response Team Staff-Sgt. Mike Deneumoustier. “Tips received from the public can be a major starting-point for investigations into drug-related offences.”

If you have information about a crime occurring in your neighborhood, call Surrey RCMP at 604-599-0502 or, if you wish to make an anonymous report, contact Crime Stoppers at 1-800-222-TIPS or www.solvecrime.ca.

Another way to help keep your neighbourhood safe is through the Block Watch Program. For more  information about this program, visit Surrey RCMP’s website.