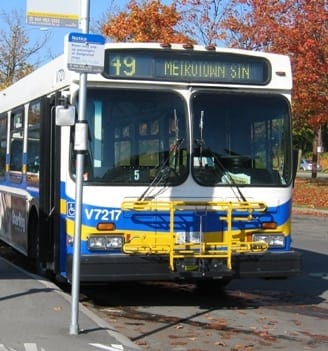 ON Monday, September 4, TransLink says it is launching the single largest expansion to bus service since the launch of the 10-Year Vision – an important step towards cutting congestion in the region.

This surge of 105,000 additional service hours is being put on roads across Metro Vancouver to reduce crowding and wait times, extend service hours, and provide better connections. These additional service hours deliver on the Mayors’ Council 10-Year Vision. They come at a time when TransLink is experiencing record-high ridership – with more than 200 million boardings in the first six months of 2017, a 5.7% increase from the same period in 2016. More service is helping to reduce traffic congestion by making transit a better option for more people.

With this round of service improvements, TransLink is increasing capacity on many of the region’s most overcrowded routes:

In addition to its regular fall service changes for post-secondary institutions, including BCIT, SFU, UBC and Capilano University, TransLink is  rolling out permanent frequency increases on the following routes to reduce crowding:

TransLink is also adding service for the first time in three growing neighbourhoods:

These three new service areas will put a bus stop within a five-minute (or less) walk for 20,000 residents in these communities.

Four times a year, TransLink adjusts bus service across the region to reflect seasonal ridership and put services where they are needed most. Through the implementation of the Mayors’ Council 10-Year Vision, in 2017-19 there will be an investment of about $2 billion in expanded transit service, transit infrastructure, and improvements for roads, cycling, and walking.