AS Christmas nears, Canadians have more holiday jeers than holiday cheers for the official leader of the opposition.

A new study from the non-profit Angus Reid Institute finds Conservative Party Leader Pierre Poilievre provoking more reaction from his predecessors, but perhaps not in the way he may want.

Asked how they view Poilievre, Canadians are much more likely to actually have an opinion of him at this point in his tenure compared to past CPC leaders. Early term uncertainty, however, has mostly been replaced with acrimony. One-in-three (33%) view Poilievre favourably, while more than half (54%) hold a negative view.

These levels of unfavourable sentiment are much higher than those of previous leaders Andrew Scheer, Erin O’Toole, and Stephen Harper at the beginning of their own leadership ventures. Of those who have occupied Stornoway in the 21st century, only Harper was met with majority positive sentiment after taking the job.

An emerging gender divide is unmistakable: Poilievre’s favourability is nearly twice as high among men (44%) as women (23%), while the inverse, though not as pronounced, is true of Trudeau (35% among men, 50% among women).

Both men will have plenty of opportunity to tackle big issues in 2023 and earn more confidence among the population. Canadians head into a new year focused on crumbling health care infrastructure and overwhelming cost of living concerns. These two issues rank atop the list of priorities for every region of the country. 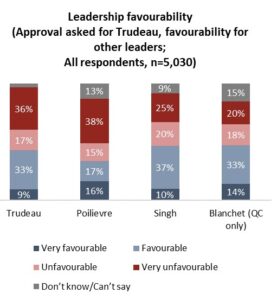 More Key Findings:
* Trudeau has seen his favourability improve over the year among 18- to 34-year-olds. Two-in-five (39%) men that age, and half (50%) of women, view him favourably.
* Almost half of constituents view NDP leader Jagmeet Singh (46%) and Bloc Québécois leader Yves-François Blanchet (47%, Quebec only) favourably.
* More than half in Alberta (53%) and Saskatchewan (57%) view Poilievre favourably, the only two provinces where that’s the case. Quebecers hold the most unfavourable views, with two-thirds (64%) saying they have negative impressions of Poilievre.