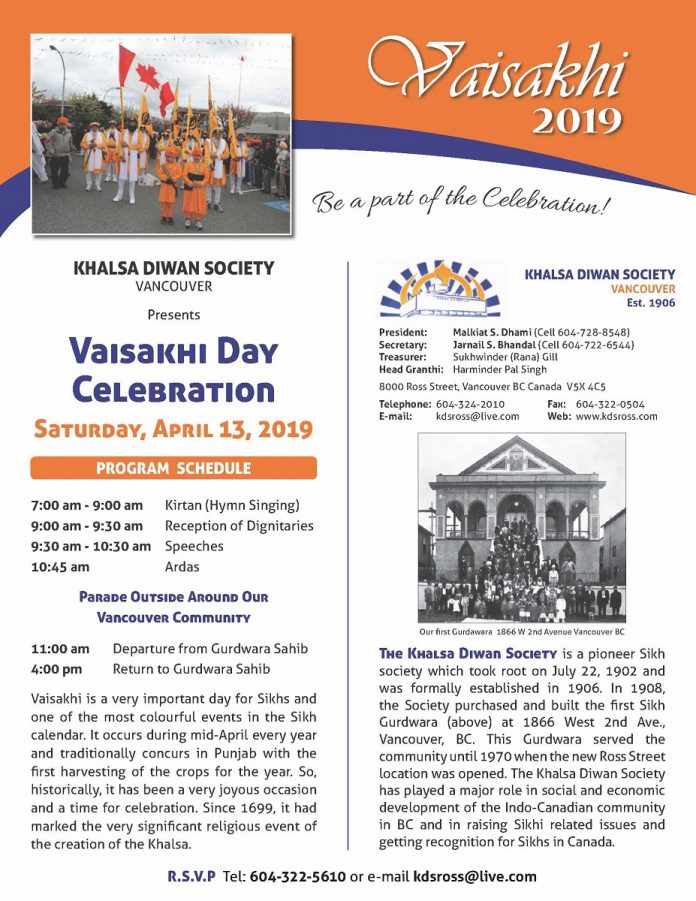 And on Thursday, gurdwara president Malkiat Singh Dhami said that Prime Minister Justin Trudeau is expected to join in the celebration.

The parade will proceed south from the Ross Street Temple on Ross Street to Marine Drive, then west to Main Street, turning east on 49th Avenue to Fraser Street, then south to 57th Avenue and west to Ross Street.

The Khalsa Diwan Society notes: “Vaisakhi is a very important day for Sikhs and one of the most colourful events in the Sikh calendar. It occurs during mid-April every year and traditionally concurs in Punjab with the first harvesting of the crops for the year. So, historically, it has been a very joyous occasion and a time for celebration. Since 1699, it has marked the very significant religious event of the creation of the Khalsa.”

“The Khalsa Diwan Society is a pioneer Sikh society which took root on July 22, 1902 and was formally established in 1906. In 1908, the Society purchased and built the first Sikh Gurdwara at 1866 West 2nd Avenue, Vancouver, BC. This Gurdwara served the community until 1970 when the new Ross Street location was opened. The Khalsa Diwan Society has played a major role in social and economic development of the Indo-Canadian community in BC and in raising Sikhi-related issues and getting recognition for Sikhs in Canada.”