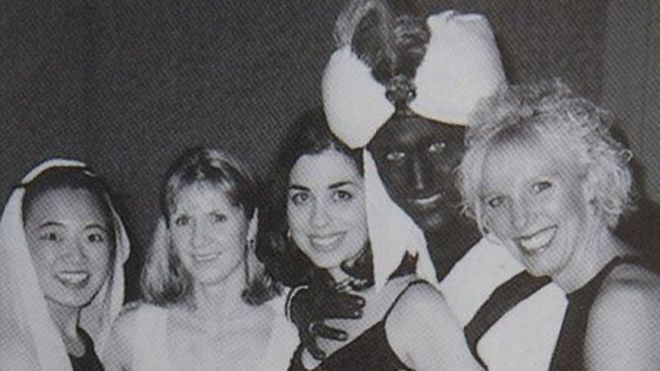 Media are now reporting about another “blackface” incident involving Trudeau. They are waiting for Trudeau’s comments on this.

The video posted by Global News shows a brief clip of Trudeau in blackface, wearing a white T-shirt, sticking his tongue out.

Liberal party spokesperson Zita Astravas confirmed to the Toronto Star that it was Trudeau in the video, which she said dates from the early 1990s.

The Star also reports that Conservative Leader Andrew Scheer admitted Thursday that his campaign team had previously obtained a video of Trudeau in blackface and leaked it to Global News.

Scheer justified his dirty tactics by arguing that Trudeau had failed to be honest on Wednesday night when he admitted to only two instances of wearing brown or blackface costumes, when three instances were revealed by Thursday morning.

TIME magazine on Wednesday published a photo of Prime Minister Justin Trudeau taken from the 2000-2001 yearbook of West Point Grey Academy, a private Vancouver school, where Trudeau was a teacher, in which he wore brownface makeup.

The magazine said it got the yearbook from Vancouver businessman Michael Adamson, who was part of the West Point Grey Academy community and felt that Trudeau’s photo should be made public.

Trudeau, then 29 years old, was at an “Arabian Nights”-themed gala. He had on a turban and robes with his face, neck and hands completely darkened.

TIME noted: “Of the individuals in six photographs from the event published in the yearbook, Trudeau appears to be the only one who darkened his skin.”

The National Council of Canadian Muslims (NCCM) is calling on Trudeau to apologize.

“Seeing the Prime Minister in brownface / blackface is deeply saddening,” said NCCM’s Executive Director Mustafa Farooq, “The wearing of blackface / brownface is reprehensible, and hearkens back to a history of racism, slavery, and an Orientalist mythology that is unacceptable. While we recognize that people can change and evolve over two decades, it is critical that the Prime Minister immediately and unequivocally apologizes for his wearing of brownface / blackface”.

Trudeau apologized for his action while speaking to reporters on his campaign aircraft , saying that he didn’t think it was racist at the time, adding, “but now we know it’s unacceptable.”

He said: “I shouldn’t have done that. I take responsibility for it. It was a dumb thing to do.”

Trudeau added: “I’m disappointed in myself, I’m pissed off at myself for having done it, I wish I hadn’t done it, but I did it. And I apologize for it.”

Trudeau also said that in high school he wore makeup while performing a version of the Harry Belafonte song, “Banana Boat Song (Day-O).”

NDP Leader Jagmeet Singh, who was at a town hall, said: “I think [Trudeau] needs to answer for it. I think he’s got to answer the question why he did that and what does that say about what he thinks about people who, because of who they are, because of the colour of their skin, face challenges and barriers and obstacles in their life.”

Singh wanted to know who the “real Mr. Trudeau” is.

“Is it the one behind closed doors, the one when the cameras are turned off that no one sees? Is that the real Mr. Trudeau? Because more and more, it seems like it is,” Singh added.

On Thursday, the media interviewed Sunny Khurana, one of the Sikhs flanking Trudeau in a photo from the event. Khurana, who runs a sari shop in Surrey, said that it wasn’t a big deal and he found nothing racist about it.