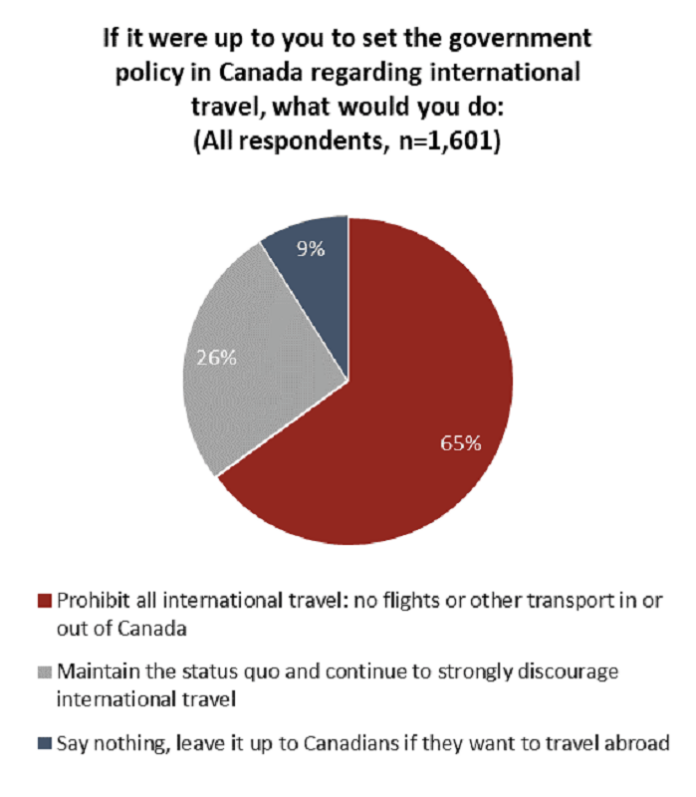 NEW data from the non-profit Angus Reid Institute finds a majority in this country would close the border to quell discretionary travel. Two-thirds (65%) say if the decision were up to them, they would prohibit personal travel. One-quarter (26%) would maintain the federal government’s current approach, which has been to strongly discourage such travel, but not disallow it. Indeed, flights to common sun or beach destinations continue to leave regularly from Canadian airports.

These sentiments are revealed against the backdrop of another major finding: seven-in-ten Canadians have themselves cancelled or put off planned international travel or domestic travel since the pandemic began, suggesting that their own sacrifices may well contribute to a hardline approach against elected officials who have chosen to travel. Nearly nine-in-ten say that while traveling abroad may not be illegal, politicians should be held to a higher standard and stay home.

* Concern about the COVID-19 pandemic remains at peak levels. Seven-in-ten (71%) are worried about becoming sick themselves, while 85 per cent are concerned about their friends or family
* While majorities across the political spectrum support a prohibition on discretionary personal overseas travel, past Conservative voters are least likely to (57%), while almost all of those who chose the Bloc Quebecois in the last election (88%) would back such a ban
* The number of Canadians saying Prime Minister Justin Trudeau is doing a good job in handling the pandemic has dropped four points since November to 50 per cent.