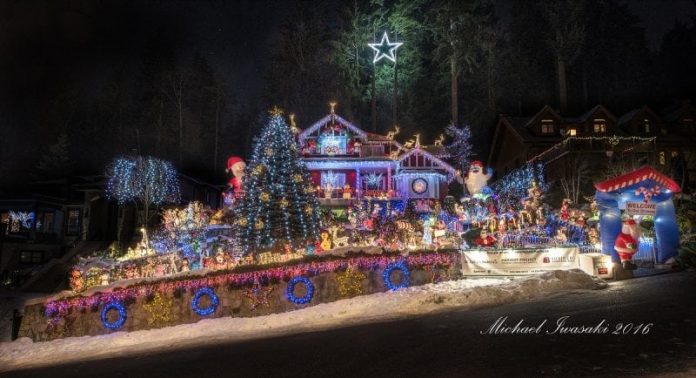 THE Ribalkin/Viau family are at it again – covering their roof, gardens, gutters, railings and driveway in thousands upon of lights, blow-up displays, Christmas decorations and holiday cheer.

The house is located at 4967 Chalet Place, at the top of Skyline Drive, in North Vancouver.

The family hopes that their beloved star will bring even more visitors, as their neighbours across the street cut back some trees, which will make the star viewable from Stanley Park and parts of downtown Vancouver.

“The star hangs 86 feet in the air on ropes attached to trees, with no nails used,” said Aurore Viau, John’s wife and co-owner of the house. “Every line on the star is 20-feet long.”

“We have been told the star is viewable from Coal Harbour already and that the entire house can be seen by landing planes.”

Opening night is announced for Saturday, December 2 from 6:30 p.m. – 11 p.m. Visitors are encouraged to come early to watch the house come on piece by piece.

The family gives 100% of all proceeds to two returning charities, the Harvest Project and Shriners Cares for Kids. The overhead is covered by Aurore and John’s business, Verico Nova Financial Services Inc.

In 2016, they added a third charity, which is BC Epilepsy Society.

“We added Epilepsy Society because this charity hits very close to home for us,” said Ethan Ribalkin, John and Aurore’s son. “My sister Philana is epileptic and we almost lost her as a toddler.”