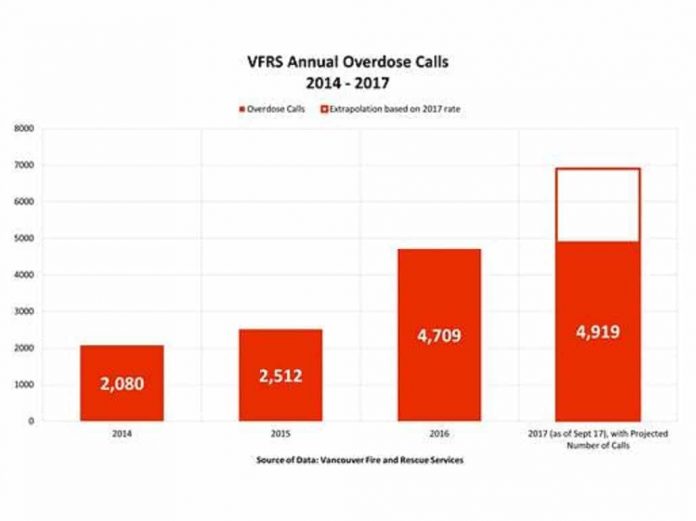 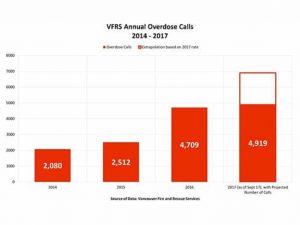 VANCOUVER Police Department (VPD) reported that Vancouver saw a total of four suspected overdose deaths during the week of September 11 to 17, an increase from two reported the previous week, the City of Vancouver announced on Monday.

The most staggering data comes as Vancouver Fire and Rescue Services (VFRS) reported a total of 4,919 overdose support calls so far in 2017, surpassing the 2016 total of 4,709. The week of September 11 alone saw 93 overdose calls to VFRS.
The City said it has been urging the federal and provincial governments to make this public health emergency a top priority and is encouraged by the $322 million in funding from the new provincial government allocated towards fighting the overdose crisis.

The City said it looks forward to working alongside the provincial government to address four key pillars of harm reduction, treatment, prevention and enforcement. A few of the actions recommended to both levels of government include: exploring decriminalization and a move towards a national regulatory framework for all illicit substances; expanding addictions treatment including injectable opioid assisted therapy; increasing the number of overdose prevention sites to all communities in need; providing necessary services in supportive housing for people at risk for overdose; implementing drug checking programs; and amending legislation for MSP to include coverage for evidence based, psycho-social addiction treatments.

Read the BC Coroners Services’ report on Illicit Drug Overdose Deaths in BC, January 1, 2007 to July 2017 at: