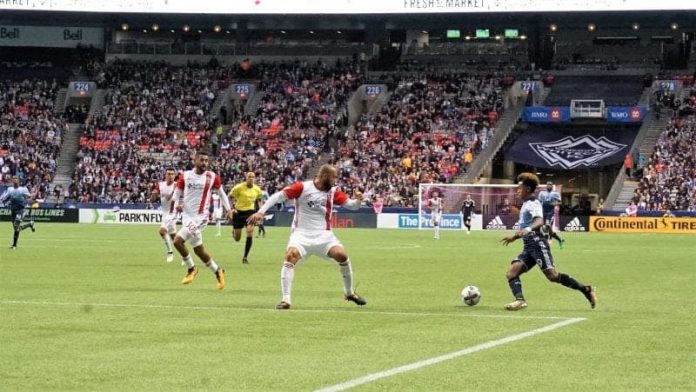 VANCOUVER: Vancouver Whitecaps FC’s (15W-11L-7D) bid for a bye to the Western Conference Semifinals will come down to the final weekend after a 1-1 draw with San Jose Earthquakes (12W-14L-7D) on Sunday evening in front of a sold-out crowd of 22,120 at BC Place.

Yordy Reyna scored his sixth goal of the season in the 29th minute but San Jose found a late equalizer through Valeri Qazaishvili to earn a share of the spoils. 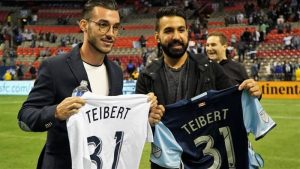 The ‘Caps, who will finish no lower than third in the Western Conference, now need a draw next Sunday vs. Portland in their regular season finale to clinch the top spot in the West.
Sunday’s match was a big one for both clubs.
The Quakes, for their part, were in desperate need of a result to keep their playoff hopes alive, which made for a nervy start. San Jose had a slight edge in possession and more shot attempts in the opening frame, but Vancouver had the two best opportunities.
And they both came off crosses from Jake Nerwinski.

In the 26th minute, the rookie right back sent in a ball that eluded a swarm of bodies in the box before falling to Brek Shea at the back post. But Shea’s first time effort was denied by Quakes keeper Andrew Tarbell, who made an important left-palm save to keep the score level.
Then, just three minutes later, Nerwinski put the final ball into Reyna at the back post on a wonderfully worked team goal that started with Fredy Montero winning a throw in Vancouver’s own half. Eventually, the ball came out wide to Cristian Techera, who released Nerwinski down the right before Reyna tapped in the rookie’s cross to put Vancouver ahead. 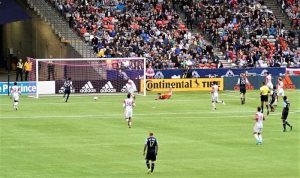 The ‘Caps had a number of chances to put the game away in the second half but they simply couldn’t beat Tarbell, who finished the night with five saves.
And San Jose made them pay.
In the 77th minute, Qazaishvili broke into the box after a cheeky Chris Wondlowski back heel and finished calmly to level the score, setting up a frantic conclusion to the match. 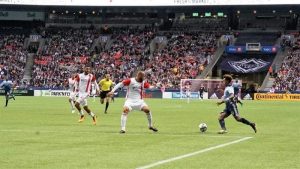 At one end, Whitecaps FC goalkeeper Stefan Marinovic made a massive diving stop on a curling Qazaishvili effort in the 80th minute. And at the other end, Tarbell denied Reyna from point blank range on the second phase of a Shea cross in the 86th minute.
In the end, a winner was simply not in the cards.

The ‘Caps conclude the regular season next Sunday at Portland Timbers (1 p.m. PT on TSN1 and TSN 1040) before opening the 2017 MLS Cup Playoffs.

NEWS AND NOTES
Whitecaps FC head coach Carl Robinson made five changes to his starting lineup for Sunday’s match, including a first-ever home start for Marinovic … Christian Bolaños was not available after picking up a red card in his last outing … the two-leg inter-confederation playoff between New Zealand and Peru has been scheduled for November 11 and November 15, meaning Marinovic and Reyna are not expected to miss any action.

MCMILLAN ‘CAPS CORNER KICK DONATIONS
For every ‘Caps corner kick at home, McMillan donates $100 to the United Way. An additional $500 is donated for every goal scored off a corner kick. This match McMillan Corners for Kids has donated $900 for a running total of $11,400.