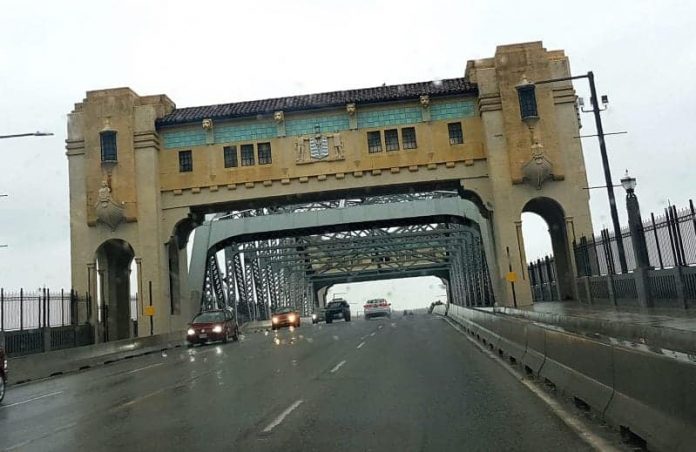 Residents are invited to attend the first official lighting of the restored bridge pedestrian lights on Wednesday, October 25 at 7 p.m.

ON Saturday afternoon, Vancouver Mayor Gregor Robertson, the City’s General Manager of Engineering, Jerry Dobrovolny, and Heritage Consultant, Donald Luxton, unveiled a rehabilitated Burrard Bridge that has reopened to all modes of travel.

“It’s fantastic to see the Burrard Bridge fully re-open to drivers, pedestrians and cyclists after many years of improvements and a complete safety overhaul for all users,” said Robertson. “The Burrard Bridge is not only a busy arterial for residents to get across the city, but also an iconic landmark and important piece of Vancouver’s history. I’m pleased to see that the final rehabilitation and safety improvements respect the Burrard Bridge’s heritage, add to its value, and make it safer and easier for all users to get around.”

Following its 80th year, Burrard Bridge underwent safety and structural repairs beginning with the replacement of 27 bearings and 19 expansion joints in the first half of 2014. Two years later, the City began a larger-scale rehabilitation of the bridge with work also focused on improving connections for people walking, cycling, and driving.

As the city’s second highest collision location, the Burrard and Pacific Street intersection has also undergone safety and reliability enhancements. The north end of the bridge has been widened to improve connections for people driving through dedicated right-turn lanes at Pacific Street:

Careful planning also went into preserving the unique significance of this Vancouver landmark in cooperation with the city’s heritage community, representatives from the film and television industry, and the city’s health partners.

“The rehabilitation of the Burrard Bridge has been an extremely complicated project that has taken many years, but the project has yielded spectacular results,” said Luxton, Heritage Consultant for the bridge upgrades. “Deteriorated elements such as the concrete handrails have been faithfully restored, and the lost pedestrian lighting faithfully reproduced. The result is a triumph of thoughtful engineering and sensitive heritage conservation, breathing new life into this unique city landmark.”

Notable improvements to the bridge include:

* Walking access returned to the east side of the bridge;

* Safety enhancements at the Burrard and Pacific intersection.

“The evidence demonstrates that the installation of means prevention fencing and crisis phones are effective in preventing suicides from bridges,” said Sandy Biggerstaff, Executive Director of the BC Crisis Centre. “We are extremely grateful for the collaboration on the part of the City, Vancouver Coastal Health, mental health agencies, and the broader Vancouver community – because it really takes the whole community to prevent suicide, and this project is one important part.”

The upgrades were approved by Council on July 22, 2015, after public consultation, and construction began in spring 2016 with funding support courtesy of TransLink’s Major Road Network program, ICBC’s Road Improvement program, and the Federation of Canadian Municipalities’ Green Municipal Fund.

As part of the Burrard Street Corridor Project, work was coordinated with water and sewer upgrades from Cornwall to 17th Ave, and from Davie to Pacific Street, which is approaching full completion in December 2017. Until then, remaining work includes line painting on the bridge, upgrades to the bridge brazier lights, as well as traffic signal improvements, street lighting, and paving work on Pacific Street from Hornby to Howe.

Since the Burrard-Pacific intersection improvements at the south end of the bridge in 2014, the number of cycling trips across the bridge grew more than 25 per cent to over 1.3 million annually in 2015.

Residents are invited to attend the first official lighting of the restored bridge pedestrian lights on Wednesday, October 25 at 7 p.m. to mark the completed work and reopened lanes. A war memorial plaque dedication for the brazier lights is also planned for November with more details to follow.

The City extends its thanks to residents, businesses, and travelers for their patience while Burrard Bridge upgrades were underway. For more information about the bridge improvements, including the Burrard Street Corridor Project, visit vancouver.ca/burrardcorridor<http://vancouver.ca/streets-transportation/burrard-bridge-infrastructure-upgrade.aspx>.

Luxton said: “As a coastal city, Vancouver is defined by its iconic bridges. The Burrard Bridge, opened in 1932, provided a gateway between downtown and the new developing west side of Vancouver, and it survives as one of the only truly Art Deco bridges in the world. A grand civic gesture, it was graced with sculptures by Charles Marega and immense pylons at each end with braziers that are a memorial to World War One.”

Kevin Desmond, CEO, TransLink, said: “As we mark Bike to Work Week this week, we’re proud to help fund these improvements around the Burrard Street Bridge that will make cycling safer and a more realistic travel option. Our success as a region depends in part on the mobility options available to residents – whether you’re travelling by bike, by car, or on foot. We have contributed $5.6 million through our Major Road Network and Bicycle Infrastructure Capital Cost programs to help ensure this vital link in the City of Vancouver is safe and accessible for all. Vancouver will see more improvements to cycling and pedestrian links thanks to this year’s contributions from Major Road Network programs including funding for separated bike lanes along the 10th Avenue corridor.”