ON Wednesday, July 20 at 3:43 a.m., Abbotsford Police patrol officers responded to a delayed report of a street robbery that had occurred about two hours earlier in the 2500-block of McCallum Road at 1:36 a.m. 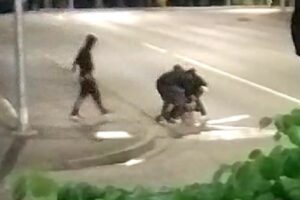 The 40-year-old female victim reported being robbed by four unknown males wearing dark clothing, all described as being in their late teens or early 20s.
Police said the suspects presented a firearm demanding money from the victim. During this altercation, the victim was dragged a short distance by the suspect’s vehicle, described as an older model two-door grey Honda Civic. The victim was treated at the hospital for non-life-threatening injuries.