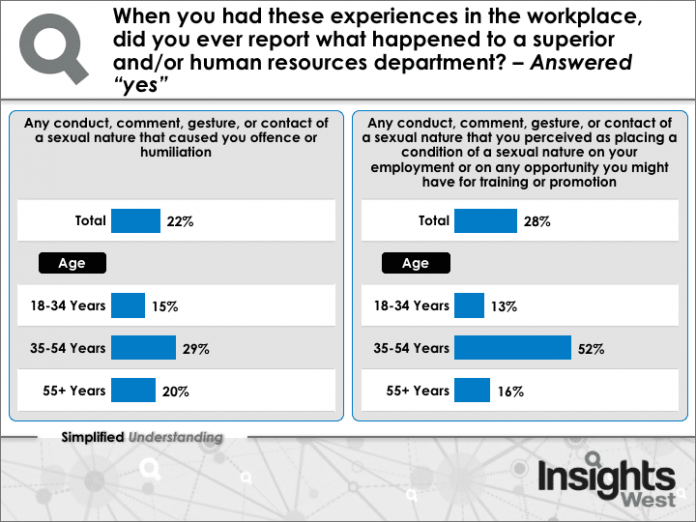 AT a time of enhanced discussions about workplace etiquette and the #MeToo phenomenon, a sizeable proportion of working women in Canada say they have faced sexual harassment during their careers, a new Insights West poll has found.

The online survey of a representative national sample of women who have worked during their adult life also shows that many of these incidents were never reported to a superior or human resources department.

The Canada Labour Code defines sexual harassment as “any conduct, comment, gesture, or contact of a sexual nature that is likely to cause offence or humiliation to any employee; or that might, on reasonable grounds, be perceived by that employee as placing a condition of a sexual nature on employment or on any opportunity for training or promotion.”

When provided with this definition, 50% of working women in Canada say they have experienced a “significant amount” (5%), a “moderate amount” (12%) or a “small amount” (33%) of sexual harassment over their careers.

However, only 28% of working women in Canada who endured behaviour that placed a condition on their employment or future career reported it to a superior and / or human resources department. Even fewer (22%) filed a complaint after being offended or humiliated by somebody else’s behaviour.

Among the working women in Canada who chose to report the unwanted activity within their workplace, almost half (46%) say that the employees who behaved improperly were penalized or reprimanded.

Among the reasons cited by the working women in Canada who decided not to report the sexual harassment incidents are thinking it wasn’t a big enough deal to bother (41%), the notion that they would be perceived as trouble makers (34%), thinking their employer would not do anything about what happened (30%), or dismiss it as unimportant (also 30%) and feeling too embarrassed (also 30%). In addition, 27% say they feared retaliation from the person who behaved this way.

“It is evident that many working women in Canada have faced unwanted situations during the course of their careers,” says Mario Canseco, Vice President, Public Affairs, at Insights West. “However, very few of these incidents have been duly reported, partly because there are low expectations for significant action.”

When asked to detail which incidents they have experienced over the course of their careers, more than half of working women in Canada (55%) listened to unwanted jokes with sexual content from a co-worker and two-in-five (40%) heard them from a boss / manager  /superior.

Massive increase in approval ratings for BC NDP and Premier Horgan