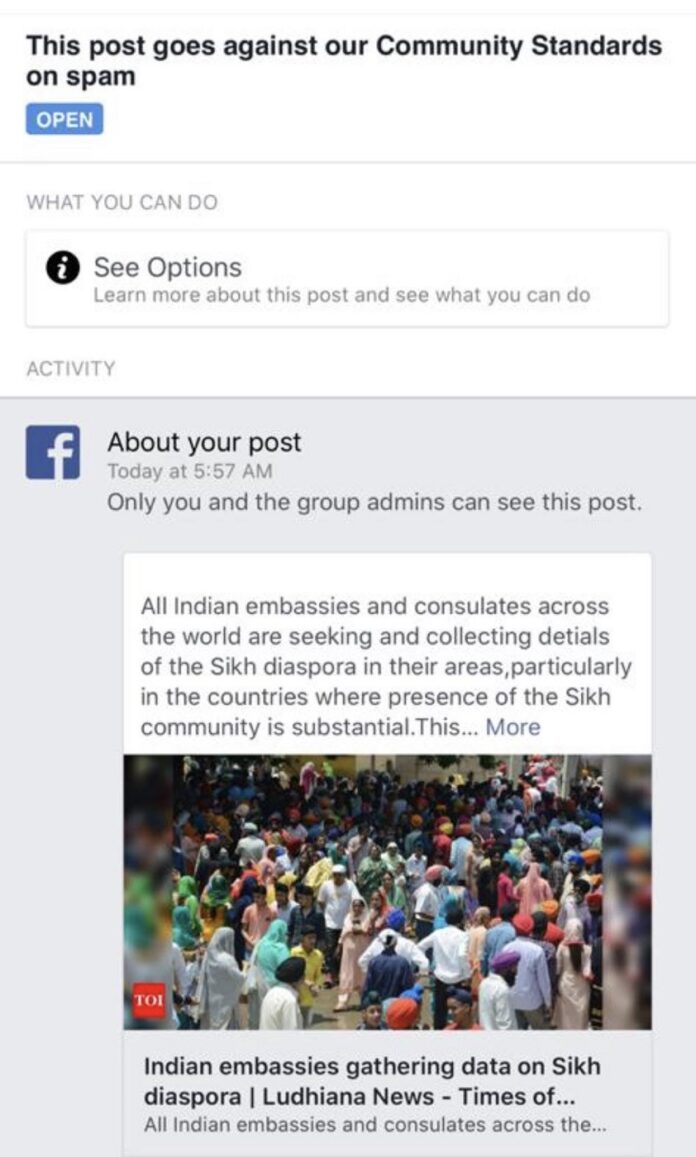 THE World Sikh Organization of Canada said on Tuesday that it is deeply concerned by renewed attempts to censor Sikh content on social media platforms.  Dozens of Sikh social media pages and posts have been censored on Facebook and Instagram over the past 24 hours.  This censorship campaign coincides with the commemoration of the 1984 Sikh Genocide.  An earlier campaign to censor Sikh content took place in June 2020 as Sikhs commemorated the June 1984 Indian army assault on the Sri Darbar Sahib [Golden Temple] complex in Amritsar.

In the current wave of censorship, content related to the Khalistan movement and prominent historical figures in the movement has been targeted in addition to posts critical of the Government of India. In what the WSO said was one particularly appalling instance, Facebook censored the posting of a Times of India article about India embassies gathering data about the Sikh diaspora. Some pages have been removed completely while other users have been restricted for 30 or 60 days from posting or commenting on the social media platform.

Last July, the WSO released a report on the crackdown on Sikh social media by Indian authorities. The report, entitled “Enforcing Silence:  India’s War on Sikh Social Media”, made several recommendations to social media platforms.  One key recommendation was that social media platforms establish a dialogue with the WSO and other Sikh stakeholders to identify Sikh historical figures being reported for censorship by Indian authorities and to better understand issues such as Khalistan and 1984.

The WSO said that no attempts have, as of yet, been made to initiate such a dialogue.

WSO President Tejinder Singh Sidhu said: “It is shocking that Facebook and Instagram are following the lead of the Indian government in cracking down on Sikh content.  It is even more disturbing that these censorship campaigns take place in conjunction with the Sikh community’s commemoration of the events of 1984 in June and November.  The vast majority of the targeted pages and posts are not offensive and simply present facts or history that the Government of India wishes to silence. The Sikh community will not be silenced. Censorship campaigns like this increase our determination to tell our stories.  We will continue to reach out to social media platforms to express the concerns of the community and to resolve this matter.”

India may reintroduce black list of Non-Resident Indians and others