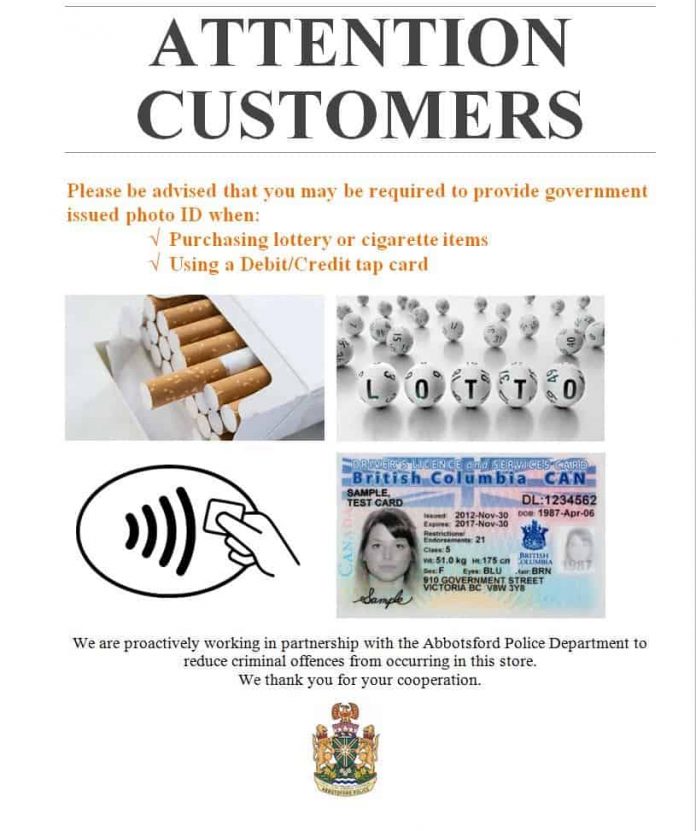 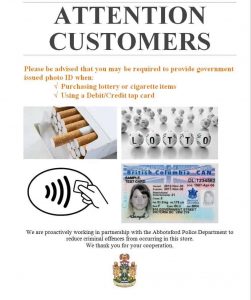 IN June 2018, Abbotsford Police Department implemented its “That’s Not You” project to combat the use of stolen debit and credit cards.

It is a common occurrence for thieves to break into a vehicle, steal a debit or credit card, and use its “tap” feature to purchase cigarettes or lottery tickets at local convenience stores.

For this project, APD patrol officers requested that local businesses ask customers for photo identification when purchasing cigarettes or lottery tickets.  Businesses and the police found that the majority of purchasers were unable to produce valid picture ID matching the name on the bank card being used. Customers who were unable to provide ID were not able to complete their transaction, and many potentially fraudulent transactions were prevented.

Requiring ID hinders the thief’s ability to commit further criminal offences, and the delay provides victims some additional time to cancel stolen cards before they can be used illegally.

Both the APD and businesses participating in the project have noticed positive results. During the first four months of project “That’s Not You”, the number of police files related to fraudulent bank card use at convenience / gas stations decreased by 50%.  Businesses that participated in the project also reported a significant decrease in attempts at fraudulent activity using credit / debit cards.

“Project ‘That’s Not You’ was initiated by Constable Parihar and Constable Perrey of the APD Patrol Division.  The project was a success based on the measured decrease of fraudulent credit / debit card offences occurring at participating businesses in Abbotsford.  This is a great example of the positive impact a program can have when APD and community stakeholders partner to combat crime.  I look forward to expanding this project to businesses throughout Abbotsford as we continue to work together to make Abbotsford the safest city in BC,” said Staff-Sgt. Crystal Jack.

“Although law-abiding customers may be slightly inconvenienced by having to produce ID when making a purchase, we believe that this inconvenience is greatly outweighed by the significant benefit – to customers and businesses alike – of reducing stolen bank card use.”

One store owner stated: “The project was beneficial and we are happy to be a part of it. We noticed a difference right away. It was a win all-around.”

This project continues to be a success in the community and any Abbotsford businesses wishing to participate in the project should contact Staff-Sgt. Jack at 604-859-5225.

All citizens are encouraged to take steps to combat theft by removing all valuables and locking their vehicle after exiting.

Are you a victim of identity theft? Visit the APD website for tips and resources: