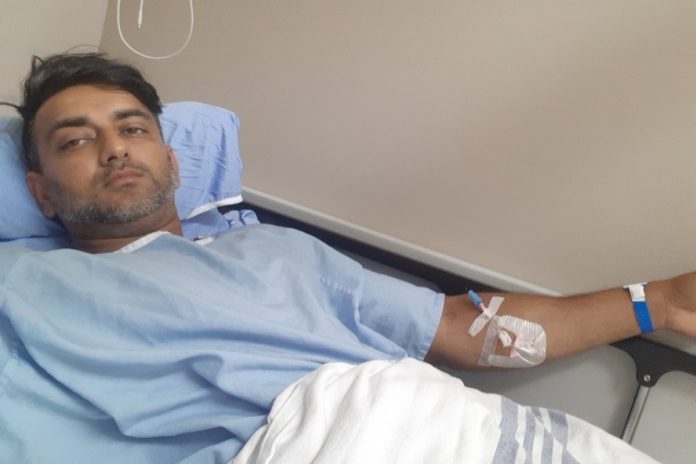 Two Richmond RCMP officers traveled to Surrey and arrested the alleged ringleader within four hours of the incident.

A GoFundMe page had raised more than $5,600 of its goal of $5,000 by noon on Monday thanks to 79 donors to support a worker at Vancouver International Airport who was brutally assaulted by six men reportedly for denying a subordinate smoke breaks at a very busy time.

Amit Prasad, who is recovering in hospital from three fractures in his spine and one in his face.

In his appeal on the GoFundMe page, he writes to his friends and relatives: “I’m reaching to you for your support while I’m recovering from my injuries. I’m recovering from my spine fracture which has limited me from walking and working. Also the x-ray shows my cheek has fracture as well. I’m a father of four children ages from 2 years to a 16-year-old. I’m the only working person in my family. As I was walking towards my car after work around 11:45 p.m. I was attacked by 6 guys. They kicked my back so hard that I have fracture in my spine in 3 places.” (Edited)

Prasad, who works for Strategic Aviation Services, is part of the ground crew that handles luggage and tows planes in and out of gates at YVR, CTV reports.

He told CTV: “The pain was so bad I screamed. I thought they were going to kill me, so I had to fight back … They kicked me in the back, and I fell to the ground. I fought back and then they ran away.”

He added: “We have ups and downs at the airport, and it was a very busy time. I would say no because it’s busy and it’s not fair for the other guys.”

Prasad told CTV that he recognized at least one of the attackers and managed to give a licence plate number to police.

Richmond RCMP Cpl. Dennis Hwang told The VOICE that they stopped a suspect vehicle, but no one was arrested from that car which is believed to be associated to the assault.

However, he said police believe the ringleader has been caught. Two officers from Richmond RCMP arrested the suspect from Surrey within four hours of the incident. He is known to the victim and is also known to police. Further arrests may be forthcoming.