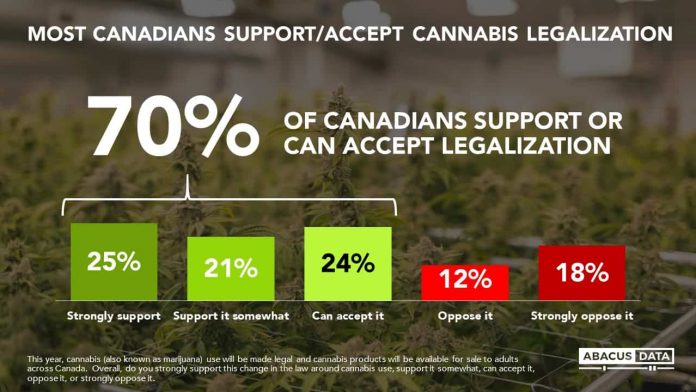 AS recreational use of cannabis is set to become legal on October 17, we conducted a national survey of 3,000 Canadian adults on behalf of The Cannabis Council of Canada in September to find out how the country was feeling about legalization.

Here’s a summary of what we found:

Liberal and NDP voters are more supportive of legalization, and in each case, roughly 30% strongly support this change. Among Conservatives, opinion is divided, with just over half saying they either support or can accept this change in the law.

Acceptance of legalization is tied to how people feel about the way policy and regulation are developing around this change. At this stage in the process, most (70%) feel that the regulatory approach being taken by the Government of Canada is working well or well enough (including 55% of Conservatives).

Attitudes towards cannabis reflect the fact that a majority do not see it as any worse than consuming alcohol. About a quarter say it is a better choice and a similar number say it is worse, with the plurality saying it is no different. Those who are younger are more likely to say cannabis is a better choice, while those who are older are more likely to say it is no difference. This sense of equivalence between alcohol and cannabis is related to the proximity that most Canadians have to the product. People who have used the product are far more likely to say it is either a better or no worse choice than alcohol. The same can be said for those that support legalization.

Half have personally tried the product with 1 in 5 (21%) saying they consume cannabis regularly or occasionally. And 7 in 10 know at least one person who consumes cannabis monthly.

A majority also say they are either comfortable or comfortable enough with edibles and beverages being available for adults to purchase in retailers licensed to sell cannabis.

As Canada moves towards legal recreational cannabis consumption, most Canadians, in every region of the country and across all political groups, either support or can accept the change.

The prevailing mood is conditioned by the fact that a good number of people have tried the product and / or know people who use cannabis, that using cannabis is no worse than using alcohol, and that the regulatory approach taken to date seems to be judged positively.

Opinions could change as people see legalization move from theory to practice, however, the mood of the country on this change, to this point in time, shows that acceptance is more common than anxiety.

The survey conducted online from September 4 to 15 has a margin of error for a comparable probability-based random sample of the same size of +/- 1.79%, 19 times out of 20.